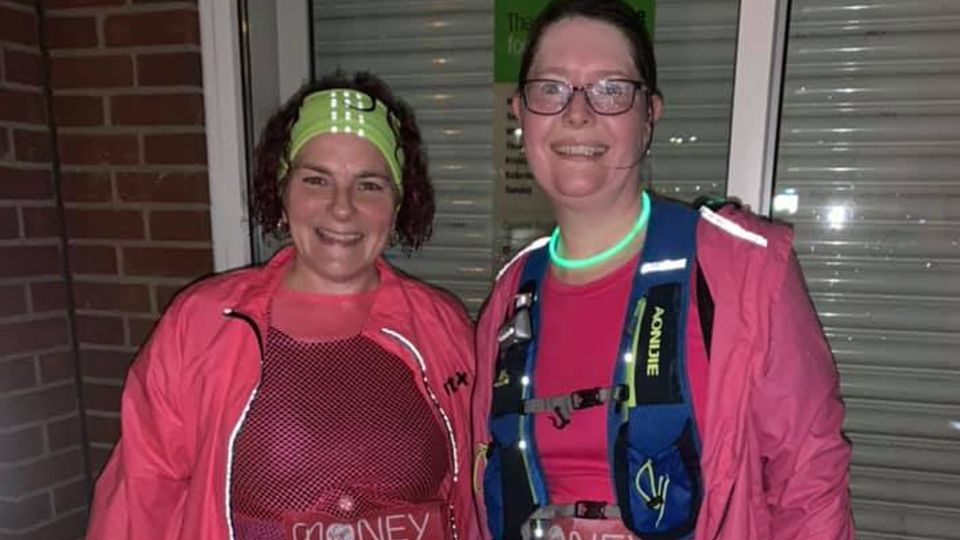 Sunday 4 October was memorable for several reasons for friends Lindsey Underhill and Sharon Sumner. They ran the Virtual London Marathon in 24 hours with constant support from their club RunTogether Baswich Run4Fun who were with them for every step, however painful, and in atrocious weather conditions. And the pair smashed their fundraising targets for mental health charities MIND and Young Minds.

The Stafford ladies were preparing for this year’s 40th London Marathon and training had been going well in the months leading up to the race. But the coronavirus outbreak in March and subsequent lockdown had a major impact and there were injury woes to contend with as well. Then the race itself was cancelled.

However, the launch of a Virtual London Marathon gave Lindsey and Sharon another chance to run the iconic race. They decided to break down the distance into manageable chunks, i.e. 5 different runs that equalled a marathon and club members accompanied them on each stage, often popping back home and returning later in the day to run again with Lindsey and Sharon.

At midnight 3 October, the intrepid pair began with a high-vis 10k. They along with several other club members endured cold, wet and windy weather during the 6.2 miles then a few hours sleep before a 5k. The next stage was a 10k at midday and better weather then another 10k on a tough course, leaving 6 to 7k to do. A change of plan led to them running the 5k again and with only 2k to go, the realisation set in that they were about to finish a marathon.

Club members applauded, cheered and whistled for Lindsey and Sharon as they broke the tape on an emotional day and a celebratory one. They were full of praise for their club who had helped them during their preparation as well as race day that made their achievement extra special.

They both have places in the 2022 London Marathon.