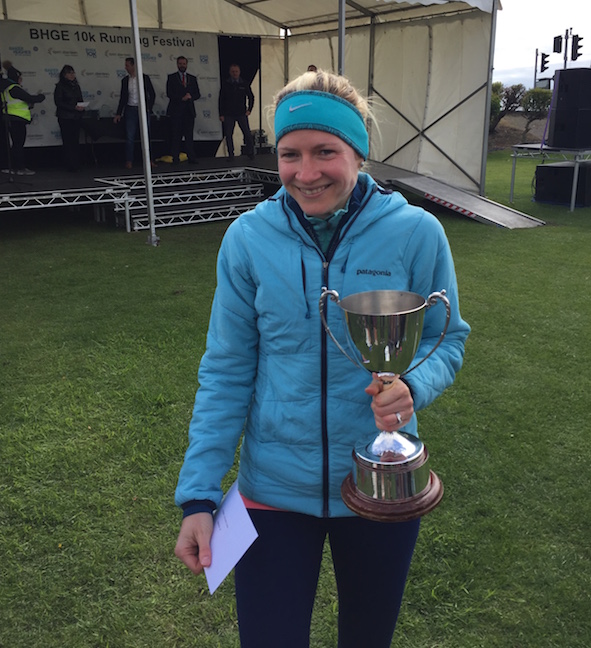 Scotland international Fiona Brian took home the female winner’s trophy at yesterday’s BHGE 10k in Aberdeen (Sunday, 5 May), making her the most successful runner in the event’s 33-year history.

This is the fifth time in six years Brian, who runs with Metro Aberdeen, had to clean space off her mantelpiece for the huge cup.

Windy conditions on the beachfront course meant this wasn’t necessarily the day for a PB as Brian herself broke the tape at 35.50, putting her outside the women’s course record set by Lynn Wilson in 2006 (35.07) by almost a minute.

But although she may not have clinched the women’s record, or clocked her fastest time for the course, her fine performance put her well ahead of her nearest podium rivals. Gemma Cormac (Inverness Harriers) came home for second in 38.02 and Kelly Williamson for third (38.56).

Brian, who battled the heat and hills of Boston Marathon just three weeks ago for (time 2.49.58), told runABC Scotland online after her win: “It took me a long time to recover after Boston. I’m not pleased with my time today, but I’m very pleased to have won.”

The men’s race was won by Brian’s Metro clubmate and Balmoral 5K winner Cameron Strachan in a time of 32.20. Hot on his heels for second was Aberdeen AAC’s Will Mackay (32.32) and Moray RR’s Kenny Wilson (32.58) for third, a week after also taking the same position in the Balmoral 5K.

runABC Scotland online’s Christine also took part. She said: "The “Baker Hughes 10k” delivered its traditional Aberdeen summer mix of head winds and chilly breezes along the North Sea coast. It was particularly tough between the six and seven kilometre points when we turned right into the wind. I think the conditions kept a lot of the spectators at home, too!"

She added: "I understand there were just over 2000 finishers this year, which is quite a bit fewer than in 2018. Organisers moved the race earlier in May this year, to the week after the region’s other really big event, RunBalmoral, and that might have contributed to it being quiet too.

"Still, it’s a great event for both runners and the community. It also gives us the rare chance in these parts to run in a 10k without hills. Because of that, the course always has good PB potential … providing the winds are on your side!'