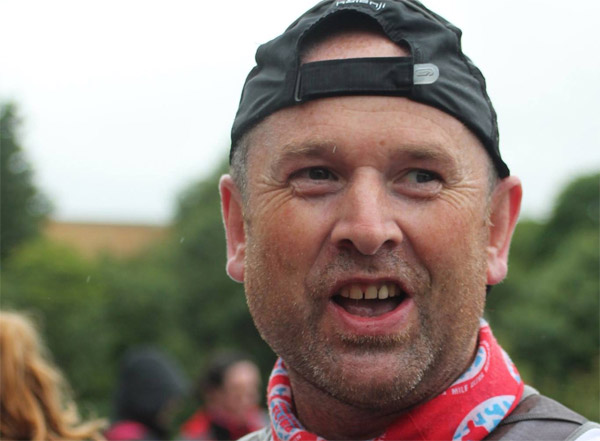 When the 600plus finishers crossed the line on Saturday afternoon and evening having completed the testing 53 miles of the 2019 Highland Fling, their thoughts would have turned to food, drinks and some serious recovery. However one finisher who had made the journey from Milngavie to Tyndrum had more pressing concerns. Andy Gallacher, who finished in 12:42:52, had a plane to catch!

So after a hug, photo and can of beer, Andy sped off to Glasgow Airport to catch the 8.30 Heathrow flight and a date with destiny at London Marathon. He made it – just – with four minutes to spare!

By midnight he was settled in his digs in Hammersmith, sustained by a bumper McDonald's (not sure which marathon guide Andy was working too!) and wondering what his legs would feel like in the morning.

Surprise to report – despite a broken sleep – the 48-year-old charity runner felt in good shape as he lined up at Blackheath on Sunday morning. He had expected to be stiff but he plugged into the excitement and drama of the start line and that adrenaline meant the early stages of the race were smooth and enjoyable.

Andy had given himself, a modest but realistic, target of 6 hours however he covered the first 10k in just over an hour and was running along with the 4.30 pacer. It was time to settle back, enjoy the views and atmosphere at Cutty Sark and, later, Tower Bridge.

Fatigue started to kick in after halfway and the stretch from 14 to 18 miles was tough, done mostly at walking pace. At one point a spectator, having a beer, offered Andy some jelly babies. He gratefully accepted but readily admits he would have preferred the pint!

After that Andy reports that he went into 'ultra' mode and 'putting one foot in front of the other'. Andy's experience at previous Flings, Glen Ogle and the River Ayr Way was now coming to his aid.

Our hero stopped his watch on 5:11:32 on the Mall and in his own words: "felt amazed and chuffed." He continued: "There were a few tough moments across the two days but I was running for an amazing cause – Dementia Revolution, which raises funds and awareness for Alzheimer’s Research UK and Alzheimer’s Society and that kept me going.

"This is a cause close to my heart. My dad suffered from dementia and I'm all too aware of the impact this disease has on the individual and their families. I'm delighted that I've had so much support from family, friends and colleagues and I knew that I had to complete the challenge to earn that support."

Andy enjoyed an ice bath and a massage then filled his boots at the Planet Hollywood post-race celebrations before heading back to Heathrow for the return flight.

Time for an easy few days for Mr. Gallacher? Not a bit of it, Andy was at his desk at the Clydesdale Bank in Glasgow at 9.00am on Monday.