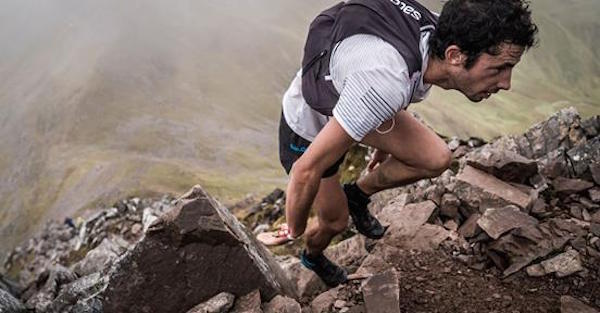 Nearly 2000 of the best skyrunners from around the world descended on the Highland town of Kinlochleven to run, scramble and climb their way through the 2018 Skyrunning World Championships.

This is the first time the bi-annual event, launched in 2010, has been held in Scotland. World titles in three skyrunning disciplines were contested – Vertical, Sky and Ultra – over the long weekend, with 27 medals and individual and national titles up for grabs.

The first event, held on Thursday, was the Salomon Mamores Vertical Kilometer (VK) race. Despite poor conditions, around 350 runners lined up to climb 1,056m in just over 5km – in other words, from sea level to the top of Na Gruagaichean, a munro – via steep climbs and rocky ridges.

Spain’s Laura Orgué, the current VK World Champion, won the women’s event, beating her own record set only last year. The men’s race was won by Rémi Bonnet, who demolished the previous record in a blistering time of 39:23.

Bonnet was challenged by the conditions in the Scottish hills. Speaking after the event, the Swiss runner said: “It was really cold out there and in the first part of the race I fell into a bog up to my waist. But I enjoyed the course and I love running in the mountains, so I was very happy to race in Scotland.”

Bad weather took its toll on the race routes, as well as the runners themselves. Friday was to see athletes compete in the ‘Ultra’ section of the championships, in the form of the Ben Nevis Ultra: a 52 km race with nearly 4000 m of climbing.

However, poor conditions forced organisers to deploy their ‘Plan B’: a reduced 47km course with 1750m of climbing. In the end, the event was won by Jonathan Albon for the UK and Ragna Debats for the Netherlands.

The battle for the gold medal in the last of the Skyrunning disciplines – Sky – took place on Saturday in the 879-runner strong Ring of Steall SkyRace.

The 29-km event incorporated two ridges within the Mamores mountain range, four munro summits, 2500m of climbing and all the 'uncompromising mountain running, including easy scrambling, steep ascents, traverses and descents on technical and challenging terrain' runners would expect.

Journet spoke positively of his experience in the Highlands: "I love coming to Scotland. It’s technical, the track is beautiful, what I love when I’m racing. What’s particular here is it’s very muddy, very wet, slippery. The terrain is similar to Norway. I fell in the mud on the last downhill. This year it was good for me, such a good field with so many strong people.”

Race director Shane Ohly said: “This sort of racing showcases the calibre of the athletes who want to race in Scotland’s magnificent Highlands landscape.”

Although the United Kingdom only earned one gold medal, points earned by UK runners throughout the competition meant the country took silver in the national standings. Spain was the overall winner and the United States third.