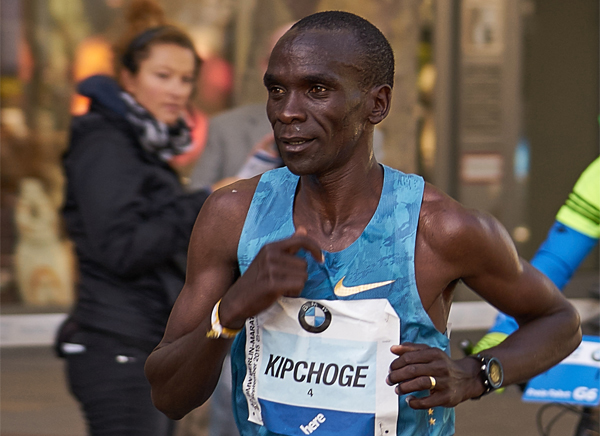 GOAT. Greatest Of All Time. That is the new accolade that can now be conferred upon Kenya’s 33-year-old marathon sensation Eliud Kipchoge following his astonishing world record in the Berlin Marathon yesterday (16 September).

Try running 100m in around 17 seconds. Now imagine running another 421 of those 100m segments at the same pace. Finally, finish looking as fresh as a daisy with arms aloft and throw in a Mobot for good measure. That is what Kipchoge did in Berlin as he obliterated Dennis Kimetto's world record by 78 seconds to raise the bar to 2:01:39.

With a halfway split of 61:06 - second fastest in history to his own 61:00 opening half set in London in April - Kipchoge dispensed with his ailing pacemakers to run a scarcely believable 60:33 second half!

We have to go back 49 years to find the last marathon world record revision by more than a minute. Derek Clayton lowered his own mark by 63 seconds to 2:08:34 in 1969. Kipchoge is now unbeaten in his last nine marathons including the Rio 2016 Olympics and he has finally nailed the world mark that has previously eluded him.

The women's race was almost as spectacular as three-time champion Gladys Cherono added a course record (2:18:11 PB) to become the fourth fastest in history, dragging Ruth Aga (2:18:34 PB) and pre-race favourite Tirunesh Dibaba (2:18:55) below 2:19 in her wake.