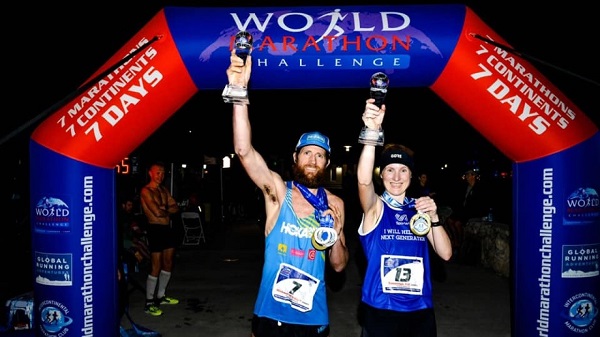 “I have had so many messages on social media, my phone can’t really keep up, it has been so amazing”. That was Susannah Gill's response to all the reaction received after she had literally conquered the world by running seven marathons on seven continents in seven days – in the fastest ever women's time.

If you think you have just had a hard week training topped off by a breezy cross country league race, as this writer did, it's time to think again. Just try and put yourself in the well worn shoes of a marathon runner who can complete seven 26.2 mile races on seven consecutive days in an average time of 3:28:09 – taking more than four hours off the previous World Marathon Challenge total time record.

The clock starts ticking when the first marathon begins in Antarctica and continues for 168 hours as competitors travel and compete in Africa, Australia, Asia, Europe, South America and North America.

Gill, aged 34 and from London, recorded 24:19:09 for her extraordinary “777” endurance challenge, withstanding temperatures from an estimated -35C in Antarctica to +30C only a day later in South Africa. Apart from changes in climate there was plenty of jet lag to cope with as the 40 competitors are flown around the globe on specially chartered planes.

The astonishing itinerary for the busy director of communications for Alizeti Group reads:

Of course, Gill is no overnight endurance sensation. A runner for 10 years, she has completed more than 40 marathons with a best of 2:58:02 at London in 2017 and will be competing in both London and Manchester marathons in April.