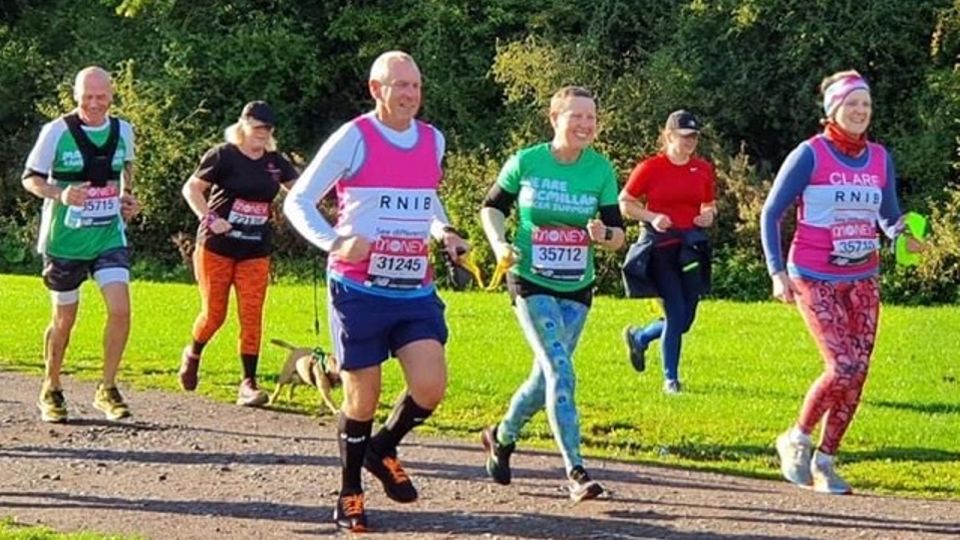 She completed the Virtual London Marathon whilst undergoing chemotherapy.

If there was an award for determination it would go to Lizzie Tovey, an inspirational visually impaired runner who fundraises for charity despite being diagnosed with terminal cancer. This one-woman force for good has recently been interviewed on the Running Tales podcast hosted by Michelle Lewis.

47 year old Lizzie Tovey from Redditch only started running in 2018 as a way out of a rut caused by mental health issues related to her sight loss. She, with the help of a local charity, managed to find a guide runner – Corin Elliott - and together they did a modified Couch to 5K.

This was the beginning of a love affair with running that has seen her complete numerous parkruns, 10Ks and half marathons all the while profiling guide running and raising funds for the Royal National Institute of Blind People (RNIB). Lizzie and husband Mark are active volunteers at Arrow Valley parkrun in Worcestershire.

In 2019 Lizzie entered the London Marathon on behalf of Guide Dogs for the Blind and raised nearly £7,000. She also campaigned via social media for guide runners to be recognised in their own right and receive a finish time and medal the same as everyone else. Guide runner Simon Elliott lent his support and it proved to be a success.

She had planned to run the 2020 London Marathon but was diagnosed with cancer in February and decided to withdraw in order to focus her energies on dealing with this disease. Then the coronavirus arrived in March that later resulted in the marathon becoming a virtual event. Sadly, she was informed that her cancer was terminal and, in light of that, plus a desire to help the RNIB that has been affected by the pandemic she, her husband and friend Clare Weaver signed up for the Virtual London Marathon on Sunday 4 October.

With 24 hours in which to complete it they broke it down into three stages that included a night run in torrential rain! Lizzie was joined by a support crew for each of the stages and all of this whilst undergoing chemotherapy that left her exhausted and unwell. They completed the marathon and between them raised nearly £15,000 for RNIB and Macmillan.

For Lizzie, the friendship and support of the running community kept her going and they are in her own words: “Phenomenal”. That word sums up the achievements of this strong and selfless runner who leads by example.

You can still support Lizzie at her JustGiving page