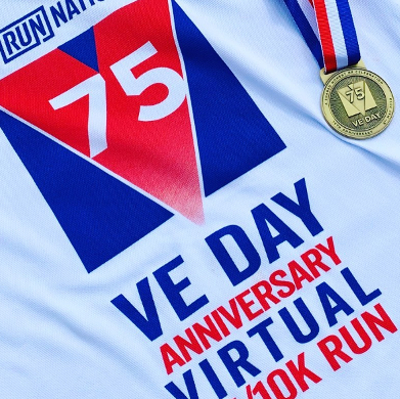 Friday 8 May was the 75th anniversary of the end of the Second World War and runners across the UK took part in virtual events to commemorate this historic occasion. From 5Ks to 10Ks, one day runs to those held over a week or a month, they united runners who in turn heped numerous charities and good causes.

People across the UK celebrated this important anniversary despite the lockdown and the running community did its bit too. Red, white and blue was the dominant theme in virtual events organised by Run Nation, It’s Grim Up North Running, Enigma Running, Virtual Racing UK and Virtual Runner.

Run Nation offered a choice of 5K or 10K at a location close to the participant’s home whilst observing social distancing rules and everyone receives a commemorative medal for their efforts. The organisers donated £1 from every medal sold to the Royal British Legion and £2 from T-shirt sales.

It’s Grim Up North Running (IGUN) extolled people to ‘Keep Calm and Carry On’ as they battled through a 5K, 10K, Half Marathon or Marathon in very warm weather for their Virtual VE Day event. T-shirts bearing this motivational slogan were sent to finishers to wear with pride.

There were, rather aptly, 75 places in the VE Day Challenge, a virtual 5K organised by Enigma Running and these were snapped up due to the significance of the event and the memorable bling.

Virtual Runner UK created a week long challenge from 4 May to 10 May where participants ran, walked or cycled as many miles as possible. A percentage of the race fees were donated to the Royal Air Forces Association.

For those who prefer to break down a distance into chunks, Virtual Racing UK launched their May VE Day Challenge with a target of 7.5 miles. Participants can run, walk, cycle or swim this in one go or over several sessions through this month.

This current crisis will end one day but until then, keep calm and run on.