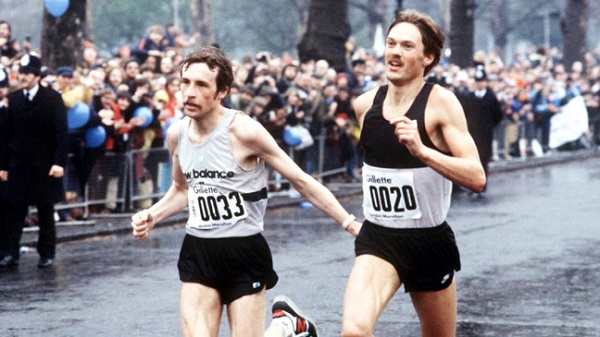 The first London Marathon was held in 1981, resulting in a historic dead heat between Dick Beardsley (USA) and Inge Simonsen (Norway) in 2:11:48. This epic race was featured on BBC on Sunday, 25 April 2020 – the very day the 40th Virgin Money London Marathon was set to enthral us once again.

London has an inextricable link with marathon running history. The first race ever to be held over the classic 26.2 miles was the 1908 Olympic Games race from the lawns at Windsor Castle to the finish line in front of the Royal Box in the White City Stadium – a distance that just happened to be 26 miles 385 yards (42.195kms).

The oldest big city marathon is Boston, held every year since 1897, having been inspired by the 1896 Athens Olympic Marathon. The inaugural Boston was run over 24.5 miles, with just 15 starters. Of the first seven modern Olympic Games, six different distances were run, but in 1921 the distance was standardised and world records were established.

London Marathon was similarly inspired by another historic event. Mountaineer, journalist and Olympic steeplechase champion, Chris Brasher, was so moved by his experience of running and reporting on New York Marathon in 1979 that on his return, having filed his tribute in the Observer, he set out to establish the first London Marathon, along with his former Olympic steeplechase team mate John Disley.

Huge hurdles of bureaucracy had to be overcome by the steeplechasing duo and the idea was all but lost due to lack of finance, with Brasher on the verge of remortgaging his house. It was a close shave, but at the last minute Gillette stepped forward with £50,000 and the race was back on with 7,055 runners (6,255 finishers) – including just 300 women – taking part.

A wet and blustery day prevented any men's records but the sight of two overseas runners battling for supremacy for two hours before agreeing a joint first pact on Constitution Hill is one that will live forever in the memory of your runABC South reporter.

However, there was a record set that day and it was not just for the biggest race ever held on these shores. A wages clerk for cosmetics company Elizabeth Arden, Joyce Smith (Shaftesbury Barnet Harriers), broke the British record with her victory in 2:29:57 – the first British woman under 2:30 – winning again the following year in 2:29:43, to become the oldest female winner at 44 years 195 days – a record that still stands today!

The Virgin Money London Marathon has been postponed to Sunday, 4 October and might have a rather different look and feel due to the Coronavirus pandemic but the famous event is built on strong foundations and we can't wait for the 40th edition to unfold.