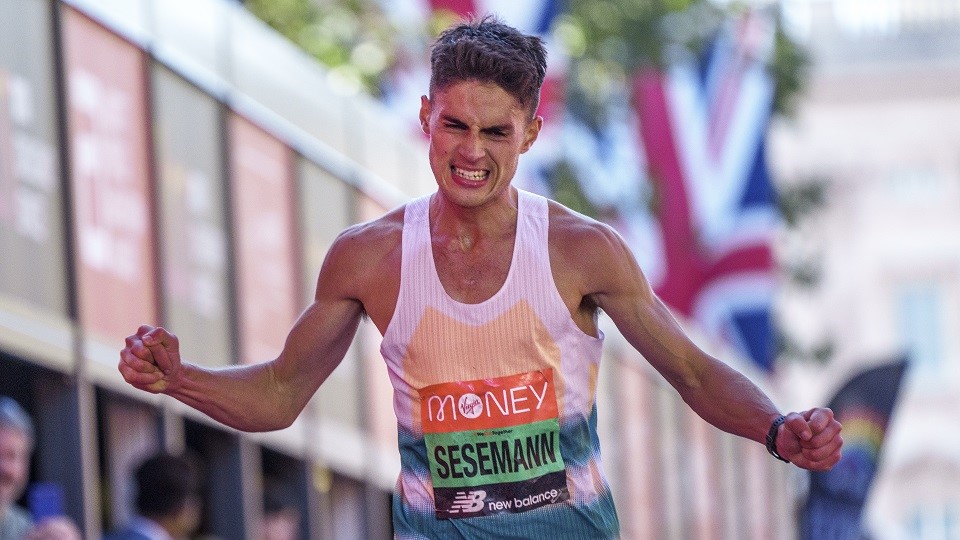 Breakthrough for Sesemann as Purdue eases the pain

London opens its heart to 40,000 runners once again

"A gritty Yorkshireman's performance", was how commentator Steve Cram described Phil Sesemann's stunning debut in the Virgin Money London Marathon on Sunday (3 October). Sesemann (pictured) finished seventh in the Elite Men's race in 2:12:58 – a Commonwealth and European Championships qualifying time – despite running in his first-ever marathon on his 29th birthday.

The Leeds City athlete is a part-time junior doctor and a former member of Blackheath and Bromley Harriers. He has just two half marathons on his CV, with a best of 1:02:47 in the Vitality Big Half in August. He trains on Meanwood Valley Trail in Leeds and clearly has his mind focused on a future at 26.2 miles as he runs up to 100 miles a week with the dog he's named after the GOAT – Kipchoge!

Sisay Lemma (Ethiopia) broke away at 24 miles to take his first London victory in 2:04:01 – missing an additional $25,000 time-bonus by two seconds – having finished third in the Elite-only race last year. Halfway was passed in 1:01:25 but the windy conditions in the latter stages saw any very fast times ebb away and Eliud Kipchoge's course record 2:02:37 was never in danger.

Vincent Kipchumba (Kenya, 2:04:28) and Mosinet Geremew (Ethiopia, 2:04:41) completed the podium but there were no group presentations or media interviews due to strict Covid protocols on mixing after an Ethiopian athlete had tested positive and had to self isolate, missing the race.

The Elite Women's race saw another impressive breakthrough by a British athlete as Charlotte Purdue (Aldershot, 2:23:26 PB) achieved the 2022 World Championships qualifying time, while moving up to third on the UK all-time rankings behind Paula Radcliffe and Mara Yamauchi. Purdue's tenth place in a world-class field was like a soothing balm on the sore that remains after her non-selection for the Tokyo Olympics, as she referenced in her cryptic post-race comment: "This was my Olympics".

Also overlooked for Tokyo by her sport's governing body was the former world record holder for 10K and half marathon, Joyciline Jepkosgei (Kenya) as she took what she described as: "The biggest win of my life", in a 2:17:43 PB. Ironically, Jepkosgei's 2017 10K world record was broken by Bahrain's Kalkidan Gezahegne (29:38) by five seconds in Geneva on the same day!

It had been 889 days since London last opened its heart to welcome 40,000 runners to the streets of the capital due to the restrictions necessary to control the Covid pandemic but what an emotional and uplifting return to near normality this year's London Marathon was.

Whether you were a volunteer, participant, virtual competitor, or an armchair supporter like this writer, runABC salutes your efforts. Welcome back, London!