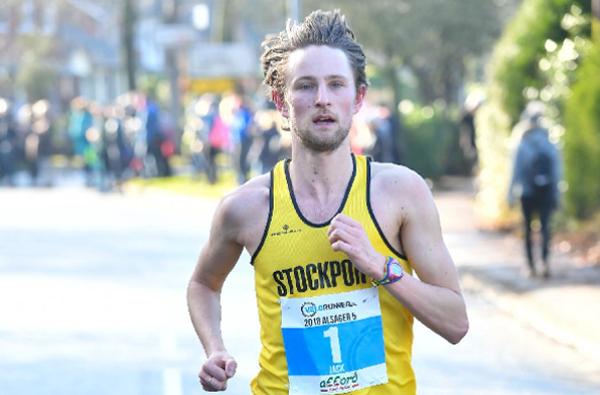 Two Up For Martin And Howarth At Alsager

There were repeat victories for last year’s winners at Sunday’s Velo Runner Alsager 5 (4 February) with fast and furious racing from Jack Martin and Lauren Howarth on a bright sunny morning in Cheshire.

Martin of Stockport Harriers & AC was first across the finish line in 24:19: some 15 seconds ahead of his nearest rival Edward Shepherd of Woodford Green AC. Shepherd finished second in 24:34 with only five seconds separating him from Frank Baddick of Newham & Essex Beagles AC who was third in 24:39.

Howarth of Leigh Harriers won the women’s race in 26:55. Katie Holt of City of Stoke AC was second in 27:37, coming on the back of her first title win at the Midlands Cross Country Championships the previous weekend. Laura Hesketh of Clayton Harriers came third in 28:09.

The Alsager 5 is a fiercely competitive race that was launched back in 1985 and since then has become a must-do event for the keen club runner. The fast, flat course appeals to PB chasers as well as being suitable for the newcomer to the sport looking to test their fitness levels. It attracts runners from across the country including top level athletes such as Welsh steeplechase champion Ieuan Thomas (won in 2015) and GB International Gemma Steel (won in 2013).

It was efficiently organised by Ken Rushton and team, who also host the Knighton 20, and started at 11am from Alsager Leisure Centre. The entrants followed a single lap around the town with a sprint finish at the Leisure Centre. They received a technical T-shirt for their hard work and efforts.