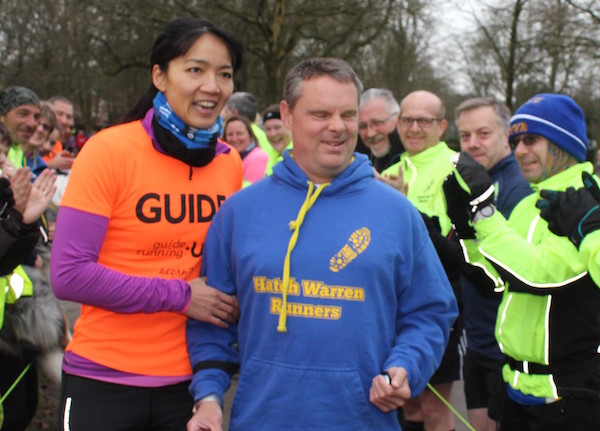 Tony Nicholls is not one for letting his disability slow him down. The visually impaired runner last week completed his 100th parkrun at Basingstoke.

He was cheered and encouraged by all around the Basingstoke parkrun course, including other runners, spectators and volunteers in War Memorial Park when he took on his 100th run. Tony began taking part in parkrun back in October 2015.

Many of the Basingstoke Guide Running group, who have shared in guiding Tony and our other visually impaired runners, were present to join in the celebrations, dressed in their orange, yellow, pink and green Guide Running shirts.

Not wanting to miss out on the milestone, even the Mayor of Basingstoke and Deane Councillor Paul Frankum and the Mayoress Councillor Jane Frankum were present to congratulate Tony on his achievement.

Following the completion of his run, many took to social media to congratulate and share stories of their running experiences with Tony.

One parkrunner said: “I guided Tony helpfully into the fence while running down Tennis Court Hill! We were trying to avoid a runner with a dog and another with a pushchair both overtaking at the same time - Tony’s subsequent recount of this story on a podcast meant the fence had transformed to one made of barbed wire.”

While a further recollection looked back on a hilarious brush with the law:“One of the police who come to parkrun every month (ironically that month publicising “Be seen! Be safe) decided to run the parkrun course in reverse, and managed to collide with “the only parkrunner who didn’t get out of the way”? Thankfully there were no injuries.”