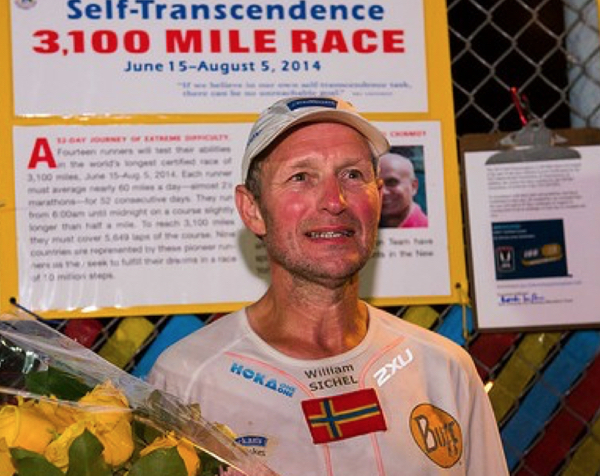 Legendary ultra veteran William Sichel has accepted an invitation to return to New York this June for the 22nd staging of the Sri Chinmoy Self-Transcendence 3,100 mile, officially recognised as the world’s longest certified footrace.

The Orkney-based athlete’s participation at the event will be an emotional one: Sichel was on the verge of competing in the race last year when he received news that his wife, Elizabeth, received a shock, terminal cancer diagnosis just a few hours before his departure for America.

Reflecting on the experience, Sichel told runABC: “I have to admit the circumstances were pretty extraordinary by any standards and Elizabeth always said I had to cope with a ‘double blow’ with both her bad news and having to abandon such a high-profile event that I had spent many months preparing for.”

“To be honest, as soon as the telephone call came in, my mindset had just changed in a flash, in a microsecond and from that point on I was focussed entirely on her care and comfort, with the race a very distant thought.”

Sadly, Elizabeth passed away 24 days after the diagnosis. The event therefore holds a special place for Sichel: “Her death will, for me, always be linked with the 3,100 and it will be a poignant return in June. Long ultra-races are always deeply emotional experiences for me and this year in New York it will be especially so.”

Described by the New York Times as the 'Mount Everest of ultramarathons', competitors must average 60 miles a day, every day in order to complete the distance inside the strict 52-day time limit. Sichel became the oldest ever finisher of the event in 2014 when completing the distance in just over 50 days 15 hours, an average of over 427 miles a week for the duration.

His upcoming participation, which commences on 17 June, is part of Sichel’s record-setting project journey to 750, in which he is attempting to set 750 running records at World, British and Scottish level, including age-group records.