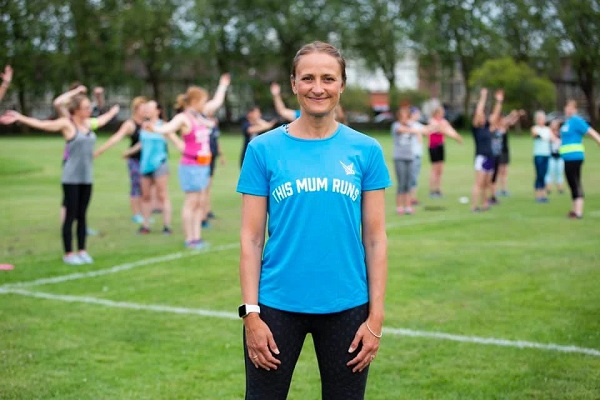 This Mum Runs has morphed into a drug running cartel! This shock news requires some unpacking, so runABC South has taken a look at what exactly the immensely popular all-female group is getting up to in Bristol.

This Mum Runs (TMR) is now the world's largest running group for Mums, with a global community of more than 100,000 members. Launched in 2014 by Mel Bound (pictured above) with 75 women meeting in a local park, the community has grown and grown, changing the way women feel about exercise, forever.

Just like every other running group and athletics club in Britain, when social distancing rules were introduced last month, all group runs were suspended. Quick thinking by the group's leader, who as a chronic asthma sufferer was wondering how she would be able to safely obtain her own regular drugs, soon led to the idea of TMR members collecting and delivering prescriptions for other vulnerable or elderly people who were having to be shielded.

And so, with a single Bound, the Bristol 'drug runners' were established and the organiser was one of the first to benefit, as she explains: “I take one of the drugs listed on the shielding list, so I can’t go and run myself,” Mel says. “I normally order my medicine through a repeat prescription on an app but the whole system fell apart, so I phoned the pharmacy and asked if a TMR runner could come and deliver it. Within an hour and a half I had it at my front door.”

The call for volunteers on TMR's Bristol Facebook page was met with an immediate response. “We had a bunch of women who were desperate to stay active,” says Bound, who had heard how overstretched local pharmacies were struggling to get prescriptions out to patients. “The floodgates opened and the response was unbelievable. Within two days, we had it all set up.”

Since then hundreds of deliveries have taken place with the strictest confidentiality, while respecting social distancing guidelines and connecting communities at this time of need.

So the 'drug runners' of Bristol are safe from the long arm of the law!