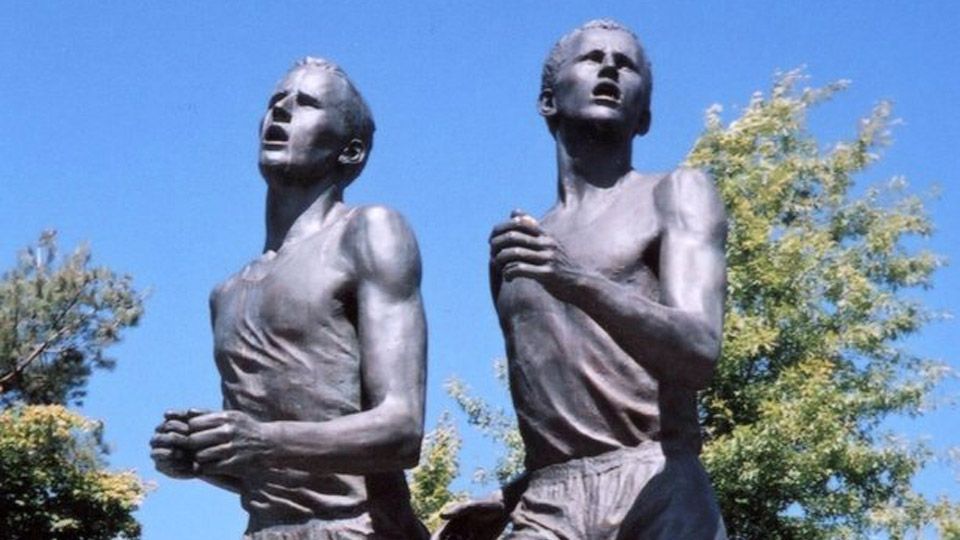 60-year-old Tommy Hughes' new world marathon record had us all wowing. But in the world of running (and athletics) what are the greatest records. Chris Broadbent (and Alan Newman) takes a view...

There was an eye-catching performance – actually make that jaw-dropping performance - from Ireland’s Tommy Hughes in setting a new world marathon record for over 60s at last month's Lisburn Festival of Running.

The 1992 Olympian showed age is little more than a number as he clocked a remarkable 2:30:02, winning the race outright, as well as slashing over six minutes from the record previously held by Japan’s Yoshihisa Hosaka. Last month, Hughes also set an M60 world best of 71:09 at the Antrim Coast Half Marathon.

These are times men 20 or even 40 years younger can only dream about. It was the sort of record that stops people in their tracks to reassess what is and isn’t humanly possible. It set me off thinking about all running records and what is the greatest of the greatest?

Of course, there are the high profile 100m and 200m sprint records by Usain Bolt that left most in the sport open-mouthed. Ditto Eluid Kipchoge’s still unofficial sub-two hour marathon, albeit in a manipulated environment of pace-making, and wind-shielding.

Though no longer a world record, Paula Radcliffe’s 2:15:25 women’s marathon time from London in 2003 still spellbinds. Although the record was broken by Kenya's Brigid Kosgei last year, sports science and particularly shoe technology have moved on significantly from Paula’s peak.

The same could be said for another record set by a British icon, which coincidentally also stood for 16 years. That’s Seb Coe’s 800m best of 1:41:73 which lasted from 1981 through to 1997 and is still within 0.82 secs of the current record, nearly 40 years on. For setting times that were far out of reach of their contemporaries and sheer longevity, both Coe and Radcliffe’s feats must be considered in context to be among the greatest runs ever at any distance.

But for pure trailblazing, it is hard to look beyond Roger Bannister’s iconic mile, when he became the first to run the classic distance in under four minutes in 1954. On a cinder track, in rather crude spikes - by today’s standards - and as an amateur runner, it remains a remarkable feat. Indeed, the number of people who have climbed Everest exceeds those who have run a sub four-minute mile.

There are so many elements to consider when assessing the greatest runs of all. For Tommy Hughes of course, age is a critical factor. To do what he did despite the natural degradation of age is remarkable.

Those from the fell running community might also ask us to look beyond the man made, manicured environments of the track and road and point to Britain’s highest peak for the greatest run of all. Kenny Stuart’s Ben Nevis Hill Race record of 1:25:34 (to the peak and back) has now stood since 1984.  With 14km distance, 1.34k of ascent and crumbling, uneven terrain, it is a run of remarkable athleticism, fortitude and skill. Me?

My personal favourite is that of Kevin Carr, who in 2015 set a new world record of 621 days for running around the world. Covering multiple terrains, an unrivalled distance and facing a constant day-on-day physical and mental test for the 21 months takes a very special person.

It's impossible not to let favouritism seep into your thinking. Such are the different elements of brilliant record-breaking running…age, terrain, pressure, meaningfulness, athleticism, longevity, mental toughness are all factors you weight when making a reasoned judgement. Whether Bolt, Coe or even Hughes is your favoured, they all have the capacity to inspire every runner. We might never be the greatest of the greatest, but we can always strive to be the best of our best.

"Paula's world record was the longest standing marathon record (men or women) in the post-war era. That is my vote for 'most outstanding WR'. I was there that day, running half the course in reverse (you could then) and I was astonished when Paula appeared so soon. I did wonder if she had overcooked it but no, she had it all worked out. A superlative performance, achieved in 'normal' shoes, that stood the test of time.

"I also have a soft spot for my former coach Bruce Tulloh's 2,876 miles across the USA from Los Angeles to New York in 64 days in 1969 with very basic support from his wife Sue, described at the time as the 'physiological feat of the century' by journalists and immortalised in his book 'Four Million Footsteps'.

"Then there is skyrunner Kilian Jornet with his Fastest Known Times for the ascent/descent of Matterhorn, Mont Blanc, Denali and Everest - not to mention the Bob Graham Round!"