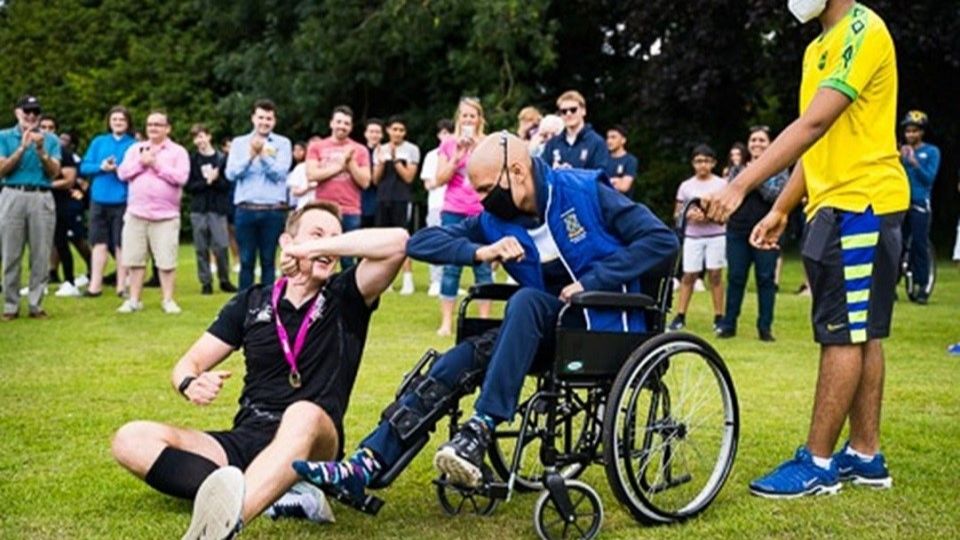 runABC online writer Alan Newman's ears pricked up when he heard BBC News reporting live from Bushy Park, London at 9:00 am on Saturday (11 July). In fact, the Royal Park that gave birth to parkrun on 2 October 2004 and is linked to Hampton Court by the Longford River was the iconic venue chosen for the conclusion of a heart-warming charity run by a devoted teacher, Alasdair Robertson.

Mr. Robertson is Head of  Sixth Form and Assistant Headteacher at Wallington County Grammar School (WCGS) in the London Borough of Sutton and he was so inspired by the courage shown by Head Boy – Sachin Shah, 17 – that he decided to run 1,000kms in 100 days, equivalent to 24 marathons, to raise funds for the CLIC Sargent young cancer patients charity.

Alasdair – Robbo to his colleagues and Mr. Robertson to his pupils – set off promptly at parkrun start time, having deliberately given himself the extra challenge of needing to complete a full marathon on the final day of his altruistic odyssey.

Sachin Shah, who was present for the last leg of his teacher's journey, was recently diagnosed with Osteosarcoma Cancer. The disease is rare in children in the UK – only around 30 cases are reported each year – and it was a hammer blow to the athletic teenager who is such a recognisable character due to his warmth, courage and enthusiasm for everything and everyone, and it’s that same relentless tenacity and strength of character that is serving him so well through such an unenviable situation, including aggressive chemotherapy and a knee replacement in the coming months.

The great news is that Mr. Robertson has completed his challenge and he smashed his fundraising target, with more than £20,000 to boost the life-changing work of CLIC Sargent who provide invaluable support for Sachin and thousands of other children and families in similar circumstances. Teacher and student are shown celebrating with an elbow bump at the conclusion of the final run in Bushy Park.

Mr. Robertson said: “Sachin is a truly wonderful student who always takes time to consider the needs and feelings of his peers above his own. He contributes widely to his school, not just in an academic sense, but leads his peers and juniors in the fields of sport and the arts. As such, I really wanted to do something to show him how much he is appreciated by everyone at the school.”

The fundraising page is still open for donations at JustGiving here