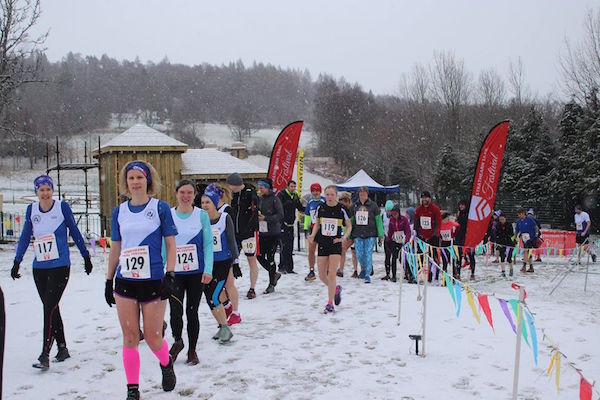 Fans of Scotland’s variable weather would have been quite at home at last weekend’s Strathearn Trail Festival.

Speaking once the dust (or, more accurately, the snow) had settled on a successful weekend, co-organiser Ben Finch told runABC Scotland online, “We had all the different weathers Scotland could throw at us – gales from the east, gales from the west, rainbows, snow and rain – and that was just Sunday!”

Saturday was the busier of the two days, as it hosted the ‘light’ 10K – the most popular event – and the ‘dark’ 10K – the same route, illuminated.

As if two 10k races weren’t enough, a 2km children’s run, down into the 4x4 quarry at the event’s Action Glen base at Crieff Hydro, was held between the adults’ events. “The kids had the best of the weather,” Finch told us, “but they still got muddy and wet!”

Sunday hosted what turned out to be a very cold and snowy 5K and Half Marathon. Finch said, “The temperature really dropped for the 5K. On Sunday, it looked like we were in a completely different place than we were the day before. The snow made it a different kind of beautiful from Saturday.”

Runners who know Finch’s philosophy of designing race routes – if there’s even a chance to run over a brutal hill, you will run over it, and probably more than once – won’t be surprised to hear that a few of the 50 or so runners who took on the 5K said it was the ‘toughest’ they’d ever done.

Crossley said, “One runner wondered in their feedback to us how it is even possible to start and finish in the same place, but for it always to be uphill!”

In truth, the 10K runners went over the Knock three times and the half marathoners six – though they’d be forgiven for thinking it was more. A marshalling error sent some runners the wrong way, adding to the challenge, albeit unintentionally. But always looking on the bright side, Finch jokingly assured us that at least they “didn’t charge the runners for the extra bits they ran”.

In total, the Festival hosted 360 runners across the four races, with eight brave souls taking on all four.

The select group of ‘ultras’, as Finch affectionately calls them, were rewarded for their efforts with four ‘spectacular’ interlocking medals – one for each race – handmade by an Aberfeldy charity offering training to young people no longer in school or with learning disabilities.

Asked whether the new two-day format worked, and whether they would continue with it, Finch was in no doubt: “It was just fantastic. It was a lot of hard work, but really wonderful, really enjoyable.”

The provisional dates for next year’s festival have already been set as 5/6 February – and the pair have also been taking soundings about holding an event with the same format in the summer.

Crossley said, “With Wee Run Events we offer something different to runners. At our events we’re like a family – albeit a family with lots of wet people, cold people and muddy people!

“Our Trail Festival wasn’t billed as a ‘race’ or a PB event. We encouraged our runners to stop and take selfies – and to enjoy the view from the top of the Knock. We wanted our runners to think of these events like training runs, but runs where you just happen to get a medal with your name on it at the end!”