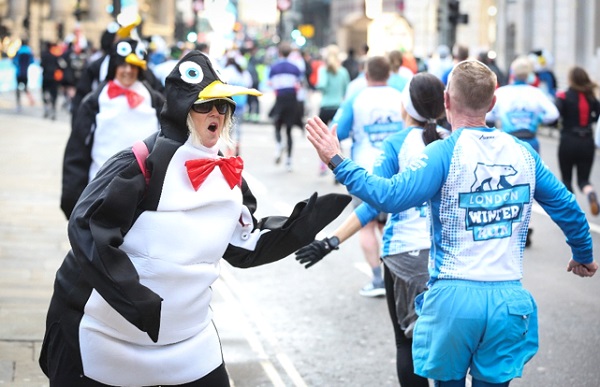 Runners set to storm to success at London Winter Run

Storm Ciara could bring a touch of real winter to the sixth annual Cancer Research UK London Winter Run on Sunday (9 February). There is a Met Office warning out for very strong winds and rain could add another testing dimension to London's coolest 10K run.

At the time of runABC South going to press there is only a minor chance the event will have to be postponed and that any changes will be purely aesthetic, such as removing some branding and inflatable structures. However, there is a possibility the bag drop may not be able to be erected, so runners are advised to check social media and the race website for the latest information.

More than 18,500 runners completed the fifth annual London Winter Run and the fastest of those were Chris Rainsford (Highgate Harriers, 31:23) and W40 Charlene Jacobs-Conradie (Luton, 35:48). Sarah Hobbs (Hogwarts Running Club, 2:20:34) had the magic experience of completing the finishers.

This year could see the UK's largest 10K race with a capacity 25,000 entry limit reached. Snow is guaranteed at the start, due to the Snow Blast-Off Zone that will shower runners with a burst of artificial snow. A four-dog Husky team will lead off the first wave of runners to add further excitement and increase the wintry feel of the event.

Trafalgar Square and Nelson's Column are the start line landmarks and other course highlights include medieval Cheapside and St Paul's Cathedral before the dead straight Whitehall finish just before Westminster, Houses of Parliament and Downing Street.

The route will be lined with cheering spectators and the character-filled Husky High-Five Zone, Swiss Chalet drink station, Penguin Party and legendary Polar Bear hugs at the finish. Then there is the all-important CRUK London Winter Run bespoke medal to collect to remember a great day out in the capital and the collective effort to raise vital funds.

Cancer Research UK hopes that 2020 will take the number of runners who have joined the fight against all cancers by running the London Winter Run to more than 100,000 and that over £3 million will have been raised to help freeze cancer in its tracks.