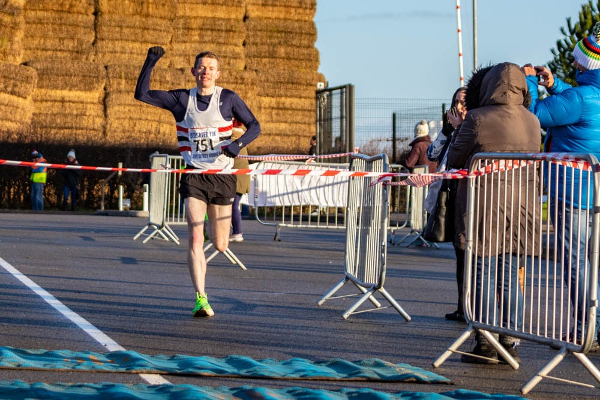 Nearly 800 runners had a reminder that it is winter as they faced freezing temperatures, a cold wind and ice at the Bolsover 10K on Sunday (15 December). William Strangeway looked cool and in control as he crossed the finish line.

Smoothly organised by North Derbyshire RC, the Derby Runner Bolsover 10K takes place a couple of weeks before Christmas and the fast course is perfect for an end of season PB, the main reason the race is oversubscribed each year with entries limited to 1,000.

Lincoln Wellington AC man Strangeway toed the line at the front of the field as they waited to start at 9.30am outside the Bolsover School. Blue skies, and blue fingers and toes for many of the runners, as they followed a mainly flat, scenic route on country roads around this Derbyshire town.

They had to take care around several patches of ice as they continued past cheerful marshals and enthusiastic crowds who braved the wintry weather to support the runners. The race finished within the Bolsover School grounds.

There were no slips for William Strangeway who was first across the line in 32:19. Tom Shaw was second in 33:44 and Nick Madgwick-Evans third in 33:05?

Chrissie Dover of Derby AC won the women’s race in 38:20. Elle Twentyman was second in 38:57 with Abbie Pearse of Steel City Striders third in 39:30.

Amongst the participants was fundraiser David Smith who usually runs in a Scooby Doo costume on behalf of the charity Sands: this time he, rather appropriately, wore a Frosty the Snowman outfit for Ashgate Hospicecare and finished in 55:51.

Over £950 was raised for Weston Park Cancer Charity.