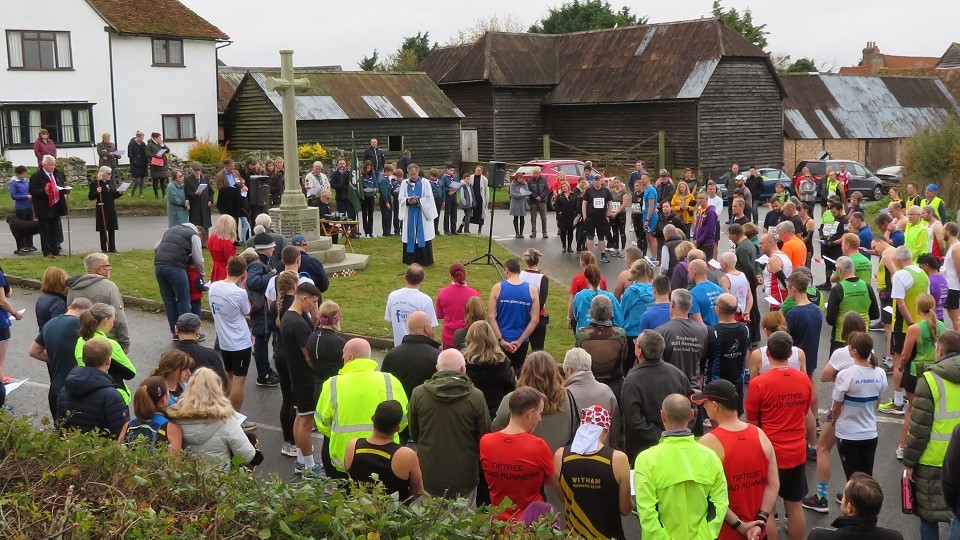 Nearly 500 congregate on the course with four 'ends'

The photo above shows an attentive congregation of runners and supporters at the pre-race Remembrance Sunday service outside the 14th Century St Mary the Virgin Church, Stebbing just prior to the Stebbing Remembrance Day 10 incorporating the Essex 10-mile championships.

Just over 51 minutes after the start was signalled Scott Cousins had claimed the Essex 10-mile championships gold medal and outright race victory in a new course record of 51:12.

Stebbing Remembrance Day 10 is promoted by Grange Farm & Dunmow Runners with race management by Nice Work and has twice won the Howard Williams Trophy as the best road race in the Essex Athletic Association area (2016 and 2017).

Race HQ is Stebbing Primary School and the start is in front of St Mary's Church immediately after the runners have been invited to join the congregation outside for two minutes silence as part of the annual Remembrance Day service.

After the moving tribute had been paid it was down to business and the pursuit of Paul Molyneaux's 2009 course record (51:39) for Springfield Striders' Paul Cousins, who finished 37 seconds inside the 12-year-old previous mark. Cousins has hit top form this year with PBs at distances from 3000m to the half marathon, including a fine 50:45 for 10 miles at the Great South Run.

M40 masters Chris Burgoyne (Springfield Striders, 55:23) and Mark McKeown (Colchester Harriers, 56:56) were among the top-15 who beat the hour on this fast, rural course that features a route with four ends – Bran End, Church End, Duck End, and ... the end!