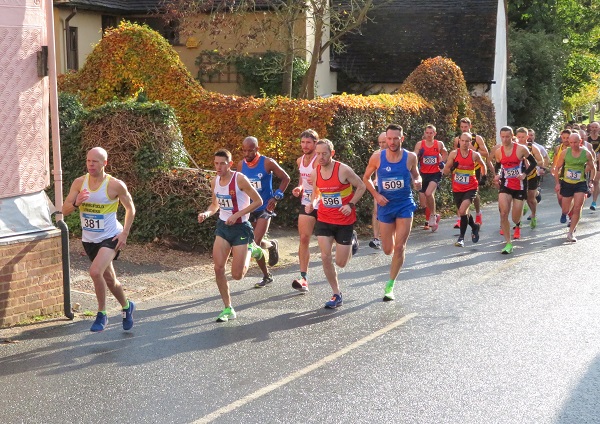 Quinn's winning margin was an impressive 2:11 as he fell just two seconds shy of the £100 bonus for a new course record. Runners-up Newton (53:52 PB) and Woulfe (54:43 PB) were both drawn to sub-55-minute bests on the rural course on lanes and farm tracks to Bran End, Tollesbury Farm, Duck End and Holt's Farm, starting and finishing at the War Memorial.

Liz Davies (Springfield Striders, 58:01 PB) was determined to secure an early Christmas present in the form of a record bonus and set to work immediately on taking more than a minute from her own 2017 mark of 59:08. Springfield Striders team mate Jackie Stretton (64:07) and host club Grange Farm & Dunmow Runners' Philippa Robinson (67:46 PB) followed.

In 2018 there were 524 finishers in 2:07:10. Sunday's race saw 505 finish in 2:15:40, with just under 300 runners beating 90 minutes. Typical of the many favourable comments on social media was this from 438th placed Rebecca Le Surf: “Had an amazing day, a first for me completing the Stebbing 10 miler. The two-minute silence, the turn out, the crowd, the organisers and the marshals. Massive thanks to you all”.