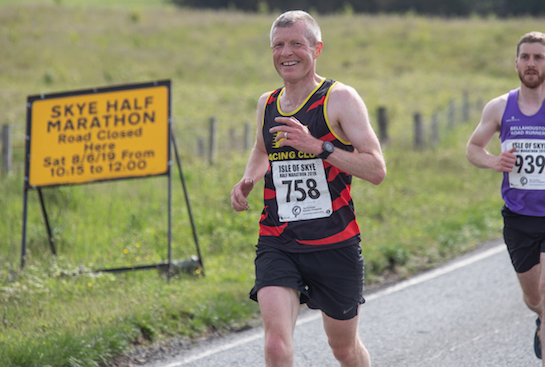 Skye’s the limit for island runners

Unexpectedly sunny conditions – despite the forecasters predicting cloud and showers – made for a fantastic atmosphere at this year’s Scottish Salmon Skye Half Marathon.

The race, first held in 1984, is the third event in the popular Heb3 challenge of taking on at least three of the five Hebridean half marathons.

Even though the warm weather increased the challenge of this scenic, but hilly, course – run for the second time on closed roads – the women’s times in particular were much improved on last year.

First female was Jill Smylie of Griffnock North AC in a brilliant time of 1.26.09. She was followed by Emily Harris, who clocked 1.27.00.

First male and race winner was William MacKay (Aberdeen AAC) in a time of 1.11.37. Local runner Hugh Campbell (Skye and Lochalsh) clinched second place with his run of 1.12.14.

The under 21s prizes were claimed by local runners Sandy Laing (Aberdeen AAC & Skye and Lochalsh) and Jennifer Shaw.

At the other end of the age spectrum, Scottish Liberal Democrat leader Willie Rennie finished the event just outside the top 20 in 1.27.36 – a time which also secured the position of first male supervet for the MSP for North-East Fife.

Rennie commented: “This is a great race, and a great community event.”

This is the third year the half marathon has been sponsored by the Scottish Salmon Company.

Company chief executive, Craig Anderson, said: "We are proud to support the SSC Isle of Skye Half Marathon.

"The pride, passion and dedication the committee and all the volunteers have is amazing to see and is what makes this such a special event for Portree and the Isle of Skye.

"Our congratulations go to everyone who took part in the race, including our own SSC team of runners, for completing such a challenging course."