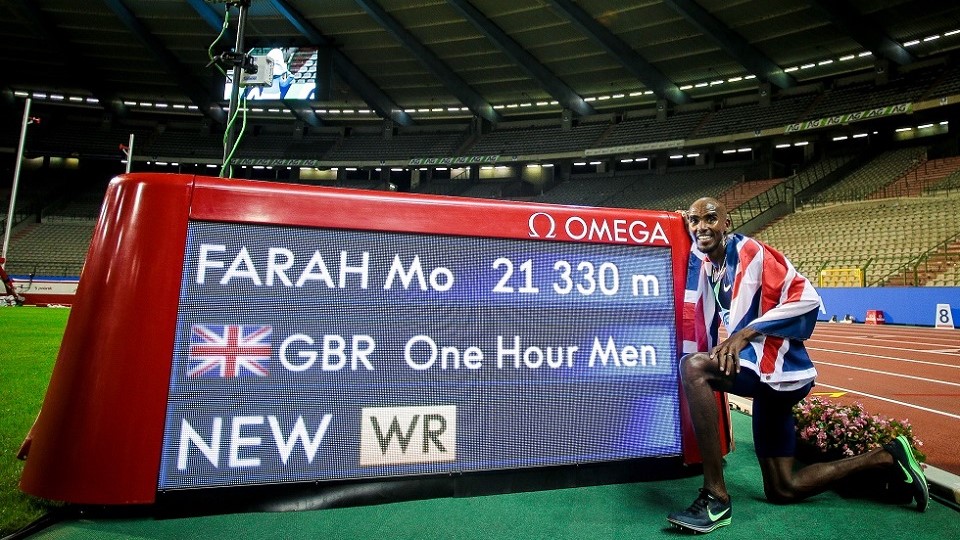 Mo flows, as the record goes!

Sir Mo Farah was back to his silky smooth best on the surface that produced 10 global gold medals for the 37-year-old Newham & Essex Beagle. The occasion was the Wanda Diamond League AG Memorial Van Damme meeting at the King Baudouin Stadium in Brussels on Friday (4 September) and the target was Haile Gebrselassie's 13-year-old world record of 21,285m for the rarely run one-hour race.

In his first track competition since winning the IAAF Diamond League 5000m final in Zurich on 24 August 2017 – having secured his 10th global gold in the IAAF World Championships 10,000m in London earlier the same month – Sir Mo looked like he had never been away.

Theoretically, running just over a half marathon in an hour on the track should have been well within his compass but the task was wisely not underestimated by Farah, who spent six weeks training meticulously at altitude at Font Romeu in the French Pyrénées before the race.

The presentation included a 'virtual Gebrselassie' running at world record pace alongside the leaders and the now common WaveLight technology that helps set the pace for the runners with flashing lights and would have visually entertained the crowd, had one been present.

Artificial crowd noise and music tracks selected by the competitors helped create a strangely compelling atmosphere as the race unfolded. This writer imagined Sir Mo's mantra could have been: “Mo flows, as the record goes”, to the tune of the 1970 hit Love Grows by Edison Lighthouse but Mo is more a UK garage and Hip Hop man and a fan of British rapper Stormzy!

Bagging the record was not straightforward. The hard track surface for an hour in spikes could have played havoc with blisters and sore calf muscles – there were a number of retirements – but after dropping slightly behind schedule at halfway and briefly losing the lead to training partner and loyal henchman Bashir Abdi, Sir Mo picked up the pace again and finished with a 63.9sec final 400m to extend Gebrselassie's mark by 45 metres with 21,330m.

Sir Mo was greeted at the finish by the twice world one-hour record holder and Gebrselassie's athlete representative, Jos Hermens but the current holder was not present to witness the race in person. Sir Mo's immediate reaction was: “What an amazing way to do it and show the people what is possible. We had to work hard. We helped each other get through but it is nice to get the world record.”

Earlier, the women's one hour track world record was smashed by late entrant and world mile record holder Sifan Hassan (Holland) by sprinting away from marathon world record holder Brigid Kosgei (Kenya) – who was later disqualified after briefly stepping inside the track – to run 18,930m. This was 413m further than Dire Tune (Ethiopia) ran in Ostrava 12 years ago for the previous record.

Image by Tomas Fisk from Diamond League on Twitter