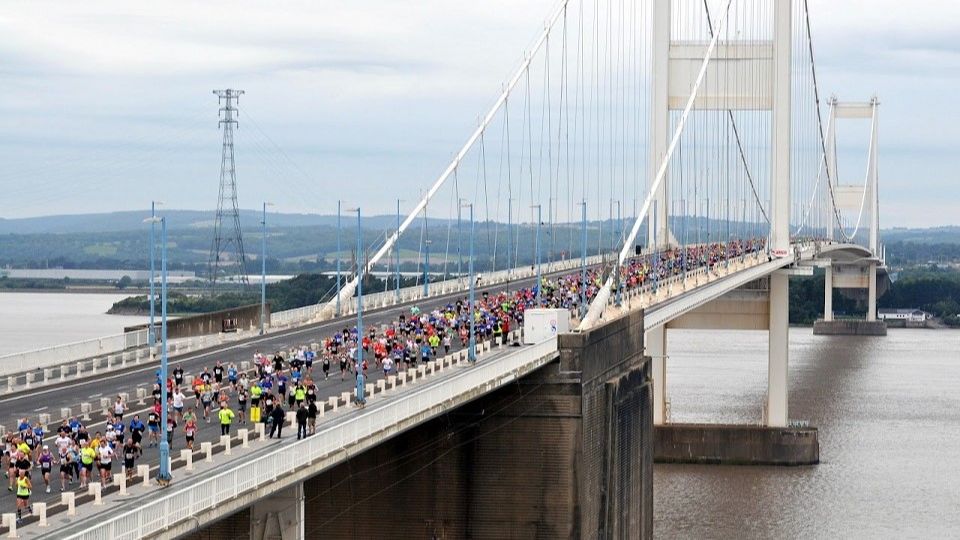 Running Between Sea and Sky

Severn Bridge Half Marathon will reach new heights on Sunday

It's not very often that a motorway is closed for a road race but that will be the case on Sunday (29th August) for the Severn Bridge Half Marathon and 10K on the M48 – "running between sea and sky...over the iconic Severn Bridge", as the race website states.

Last year's elevated running experience was restricted to a 10K time trial enjoyed by 726 runners, who were suspended 47 metres above the River Severn. The fastest of the solo athletes, who were started at 10-second intervals, was Lloyd Sheppard (Cardiff AAC, 32:28) and Becki Timmings (BRAT, 37:09) took the women's race victory on corrected times.

Some adjustments have also been made to this year's arrangements. The half marathon will now be held entirely on the bridge structure over two laps of the 10K course plus an out and back 1097.5 metres stretch to make up the full distance.

The race village at the Chepstow end of the bridge below Junction 2 of the M48 in Wales remains, so the tradition of running from Wales to England and back has been preserved.

All runners can expect a safe, completely traffic-free course with a testing hill over the bridge (see image above). There is ample free parking, caterers, and an ice cream van on site. In a retro touch, cash prizes are awarded to the top three men and women and a bespoke commissioned trophy is awarded to both individual champions.

Previous races have featured the athletically tuned lungs of bagpiper John Campbell piping the runners home for a never-to-be-forgotten goosebumps moment, as described by 51:33 finisher Sarah Woodley-Williams following last year's event: "This was my first 10K and I will never forget the sound of those bagpipes as I could see that finish line in sight. It was like something out of a film!! Amazing...thank you!!"

Look out for our race report and unbeatable results service on runABC South next week.