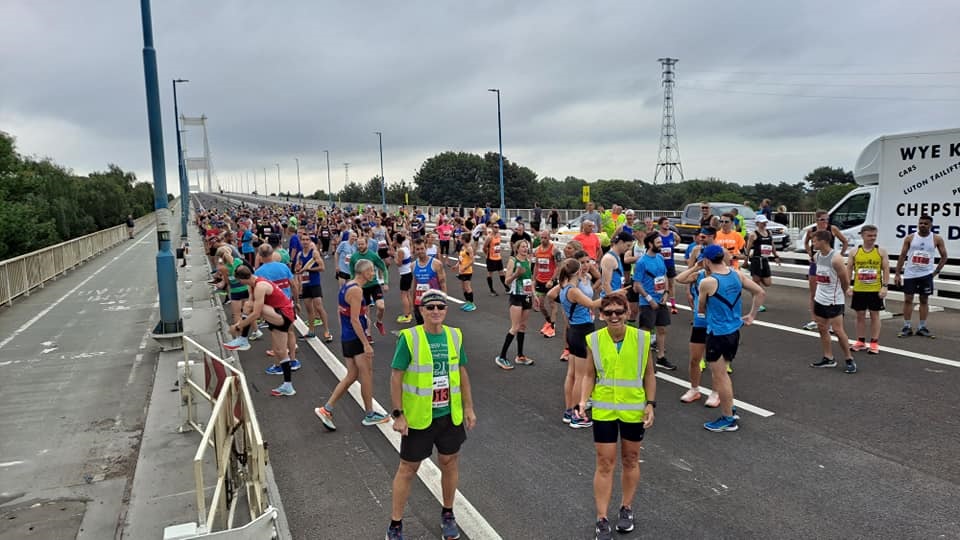 All the ones for Simeon at Severn Bridge Half Marathon

Just under 1,000 ran between sea and sky on Severn Bridge

He should have been given race number one!

Simeon Bates, of Gossy's Gazelles, was actually sporting bib number 723 when he finished first in 1:11:11 in the Severn Bridge Half Marathon on Sunday (29 August).

The race that is sub-titled on the event website as, "Running between sea and sky", attracted 426 finishers in 2:53:38 and is held entirely on a closed section of the M48 Motorway over the iconic Severn Bridge crossing.

This year's half marathon was run on a modified course that was basically two laps of the 10K route – out and back twice – with a commensurate doubling of the not inconsiderable inclines. Lee Stopford (Stroud & District, 1:13:03) and Ross Matthews (Islwyn RC, 1:14:37) were the podium placers behind the flying Simeon Bates in the men's race.

The revised route for the 13.1-mile race was appreciated by many of the runners, including Anne Kelsall who posted: "A superb event, well organised and brilliantly marshalled. Loved every minute. Am I alone in preferring the amended route? Just so beautiful and also easy to pace, although I had forgotten just how mean the sting in the tail is!"

The supporting 10K was even more popular, with 531 finishers in 1:48:44. More than half the field went through the finish in an hour and the top three men were Jon Like (Torfaen Runners, 34:35), under-20 junior Oliver Price (Cardiff AAC, 34:46) and Arron Kearney (Bideford AAC, 35:19) – who later posted on Facebook: "Today was brilliant. Really well organised and a great atmosphere. First time for me, will be back again for sure".