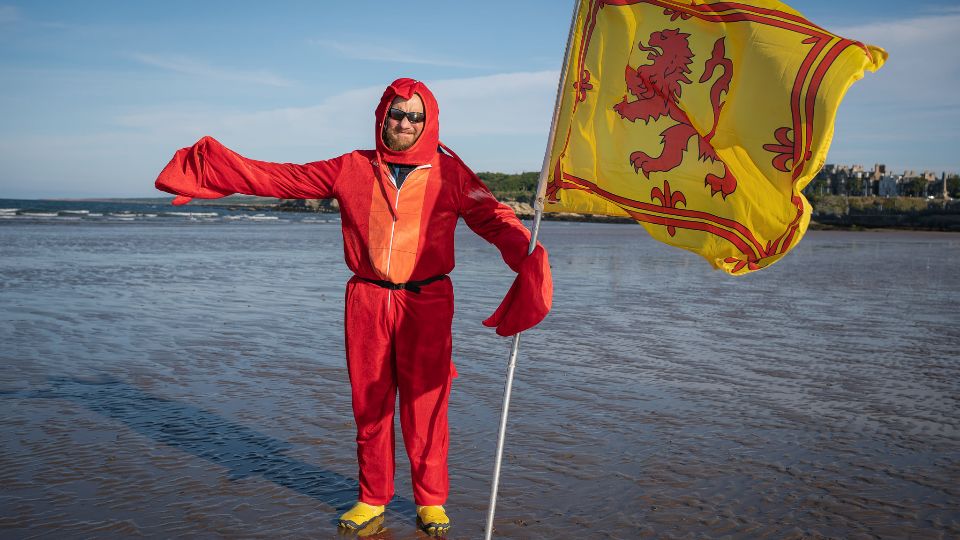 The 100 runners lucky enough to secure a place in Saturday’s Splash & Dash Beach race organised by Trails of Fife were treated to glorious conditions, a forgiving tide and the full support of a very patriotic red lobster.

The 4.5-mile-long race has been held on the firm surfaces of St Andrews’ magnificent West Sands beach since 2017.

At the end of each lap, runners were treated to what organisers have long called ‘a nice cooling dip'. Given Scotland’s recent heatwave, the chance to ‘get more than their feet wet’ was likely appreciated by most.

Runners’ comments on social media were overwhelmingly positive, with many praising the organisation and the marshals – ‘both wet and dry’. One runner who said this was her third Splash & Dash said that ‘it was as good as it always is: easy registration, great parking, happy marshalls and a flippin' lobster!’

Even those ‘happy marshals’ enjoyed the event, with one commenting, ‘Some great racing and, even better, smiley runners.’

As Raymond Leinster, who shared his photos of the event on Facebook, summed up, 'There are track runners, trail runners and hill runners but the most fun loving have to be beach runners!'

The two-lap race was won by Nicholas Lightfoot (27.40, University of St Andrews). First female home was Alison Berwick (31.48). The time for the first lobster across the finish line was not recorded.

All proceeds from the event will be donated to Epilepsy Scotland.