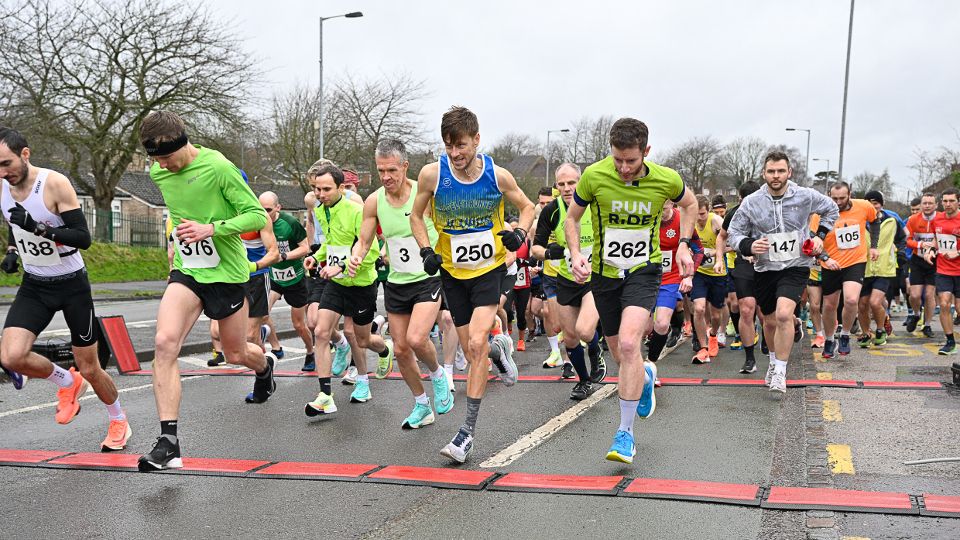 Rugeley 10 races back to its best

Nearly 300 runners battled wind, rain and hills at the Rugeley 10 Mile (Sunday 20 February). Race 2 in the 2022 NSRRA Programme, it was a well organised and marshalled event that saw strong performances on the day.

Held on a wild weekend that saw Storm Eunice then Storm Franklin, the Rugeley 10 Mile Road Race went ahead following course inspections on Saturday and early Sunday morning. Organisers Rugeley Runners posted an update on social media on Friday 18 February regarding the situation with the weather and later confirmed that the race was on.

It was third time lucky as the race had been cancelled in 2020 due to floods and again in 2021 as a result of Covid-19. Everything was in place for a hard yet rewarding run on a scenic course and there was a good turnout from local running clubs eager to put their winter training to the test.

The race started and finished at Redbrook Hayes School, Brereton, Rugeley and included a hill at 1 mile; an undulating section between 4 miles and 7 miles then the short and sharp Grange Hill. A quick swig of water before a long and steep climb that was painful for the legs and lungs before over the top and the fast downhill section to the finish.

Lee Gratton got off to a flying start and the Rugeley Runners man powered his way up, down and around to be first home in 55:06. Jack Scott of Inov-8 was second in 57:14 and Ross Connor of City of Stoke AC third in 57:50.

City of Stoke AC’s Kelly Butler continued to impress, becoming the first female in 1:05:58 and added the Rugeley 10 to her growing list of wins. A gap of more than two and a half minutes between her and Kirsty Stephenson of Stone MM who was the second female in 1:08:36. Hermione Green of Lichfield RC finished third female in 1:09:11.

The last runner finished in 2:20:26. A complete set of results can be found via the runABC Midlands Race Listings page.

It was a demanding race in stormy weather but as the saying goes: “When the going gets tough, the tough get going”. Enough said.