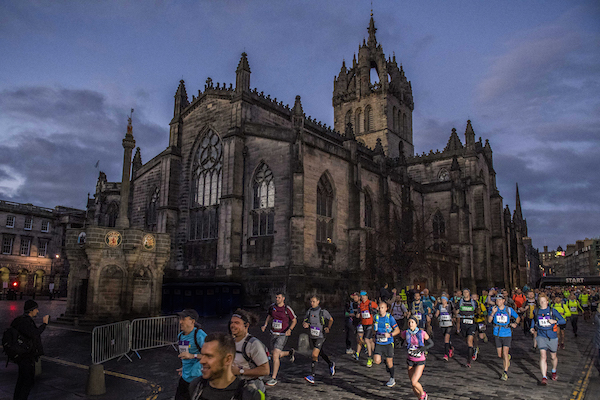 400 runners took part in the ultimate sightseeing trip in, up, around and through Scotland's capital city on Sunday 21 October).

The 34-mile Ultra Tour of Edinburgh, organised by Rat Race Adventure Sports, was won by Edinburgh’s Nicola Duncan in a time of 4.37.49.

Karol Stanski, also from Edinburgh, crossed the line just a few minutes behind Duncan (4.42.59) to claim second place and the men’s title.

Finisher Paddy Evans, who also took part in last year’s inaugural event, told runABC Scotland: “Nothing says ‘Welcome to Scotland’ quite like charging down the Royal Mile as dawn breaks.

“We passed Holyrood and went up and over the Salisbury Crags next to Arthur’s Seat, before heading past a variety of landmarks such as Craigmillar Castle, the Royal Observatory, Braid Ice House, Murrayfield, Newhaven Lighthouse, the Royal Yacht Britannia, and more in between, before finishing up with hot food at the Royal Commonwealth Pool.”

Evans also told us the weather was broadly kind to runners, too, “but a helping of horizontal rain in the Pentlands is always a swift and effective reminder this isn't just a simple urban run.”

He added: “There was plenty to see, plenty of elevation, and plenty of miles. There was excellent route marking, an experienced team behind the event, and enthusiastic marshals, too.

“The event ably demonstrates why locals are so proud of the area, and why so many more travel so far to experience the run. What more can you want from the capital?”