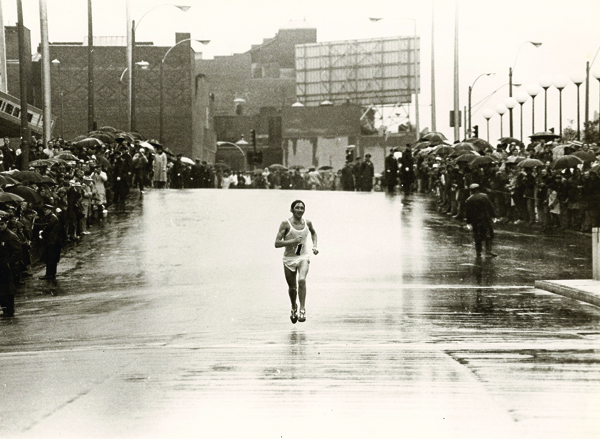 Ron Hill is remembered as one of Britain’s greatest marathon runners, and runABC looks back to 1970 and Ron's 'annus mirabilis'.

When Ron Hill climbed on to the podium in Edinburgh at the Commonwealth Games in July 1970 to collect the gold medal for a stunning victory in the marathon, he was at the zenith of his running powers. Just a few months earlier he had become the only Briton to have won the prestigious Boston marathon, first in a record time despite wet and windy conditions.

Ron holds a place in the affections of sports fan across the UK as one of the great marathon runners, but his early ambitions had been at 5,000 and 10,000 metres - he placed 7th in the 10,000 metres in Mexico City at the 1968 Olympics. However it was over the classic 26.2 mile distance that the lad from Accrington near Manchester would find fame.

Early signs came when Ron made a winning marathon debut in 1961 in the old Liverpool marathon. In 1964 he broke the previous world record in London despite missing the turn at 22 miles in the Polytechnic marathon to record 2:14:12; unfortunately Basil Heatley had finished 16 seconds earlier - both runners bettering Leonard Edelen's world record from the previous year - 2:14:28.

Despite these intermittent successes Ron Hill remembers the mid-1960s as a period of set-backs and frustration and identifies the Maxol marathon in early 1969 as the race when the worm turned: "I was chuffed to win that race and delighted to find out that I had finished in 2:13:42, at last I had improved on that 1964 time. More significantly my time was two minutes better than world record holder Derek Clayton who was second. Maybe my luck had changed."

Ron now prepared for one of the biggest races of his career after selection to represent GB in the marathon at the European Championships in Greece. The Lancashire lad produced a top-drawer performance to dominate the race on the Marathon to Athens course. Ron's only serious rival was Belgian Gaston Roelants and he caught him with a kilometre to go. By the time the field entered the Panathinaikos Stadium, Ron was in front and he remembers a very proud moment as he crossed the line to win gold watched by an enthusiastic crowd that included his wife, two young sons and parents.

Ron's run of success continued into 1970 when he crossed the Atlantic to compete at Boston in arguably the world's greatest marathon. A ‘recce’ on the eve of the race convinced the notoriously nervous Hill that the feared Newton Hills wouldn't inconvenience him too much and put him in good heart for the big day. However heavy rain and headwinds meant the 1970 Boston marathon was run in extremely difficult conditions.

Ron Hill made his usual lively start and soon he only had Jerome Drayton for company. Despite the problematic weather Ron drew away from the Canadian and seemed to be heading for an easy success when Jock Semple, the controversial Scot who ran the big Boston race, bellowed from the sidelines that 'O'Reilly was coming up'. That warning spurred Ron to a final push that saw him come home in 2:10:30, a new course record time - three minutes quicker than the previous best. After watching Geoffrey Mutai finish in 2:03:01 helped by a tailwind in 2011 Ron joked that he could have shaved quite a few minutes off his 1970 time with such favourable conditions.

Next up was the Commonwealth Games and the prospect of winning a medal close to home. Ron takes up the story: "A very strong field toed the line in Edinburgh on that warm July day in 1970 and we made a fast start. Very quickly a group of five or six had taken a noticeable lead however at just 6 miles that was down to three or four. At the point when I was going through the 10 mile mark on 47:45, I was on my own.

"The course went out and came back on itself, so as I turned for the second half I was running back passed my competitors, and giving them smiles and the thumbs-up, and shouts of encouragement, so they would think I was running so comfortably that they would never catch me! The reality of how I was feeling was very different of course.

"With just two miles to go, Andy Holden, the steeplechaser from Preston, urged me to increase the pace and claim the world record but as I climbed Portobello Road my thoughts were only of the gold medal. However my finishing time of 2:09:28 was the fastest ever run and a very special occasion with all my family there to see my success."