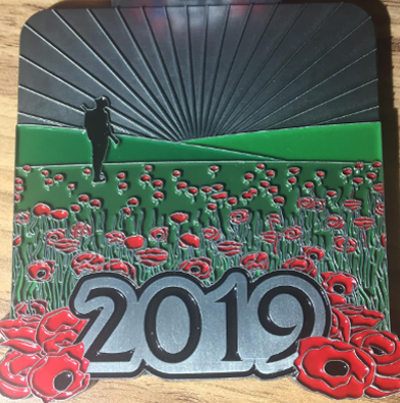 There was a two minute silence at Sunday’s (27 October) Brigg Poppy 10K and Military Challenge in respect of those serving/ had served or lost their lives in battle. Hundreds took part to support the Royal British Legion and Poppy Appeal.

Runners were asked to wear red to replicate a field of poppies at this sold out event organised by Curly’s Athletes. The Brigg Poppy 10K and Military Challenge were held in this attractive market town in North Lincolnshire whose community supported the efforts of participants in both races.

The Military Challenge required the competitor to wear a weighted backpack and boots as they ran, jogged or ‘tabbed’ (walked) the same route as the 10K. At 9.20am a piper led out the competitors followed by a two minute silence at 9.25am before starting at 9.30am. The 10K started afterwards at 9.45am.

Ahead of them lay a fast course on quiet country roads around Brigg town centre with a water station at 5K, manned by a squadron of Air Cadets. There was encouragement from marshals, volunteers and the people of Brigg that made a difference, especially with strong winds on the return stretch.

James Croft of Gainsborough & Morton Striders won the 10K in 34:57; Tracey Fearn of Caistor RC was the winning lady in 40:22. Wheelchair athlete Caroline Phillipson finished in 34:57:8.

In the Military Challenge, Craig Barker was the winner in 42:08; Anna Warner of Grimsby Tri was the first female in 1:00:39. There was a big cheer for the Royal Engineers Old Boys Cycle Club as they marched over the finish line.

A memorable medal and cake awaited the finishers who felt a sense of pride at their achievements whilst supporting two worthwhile causes.