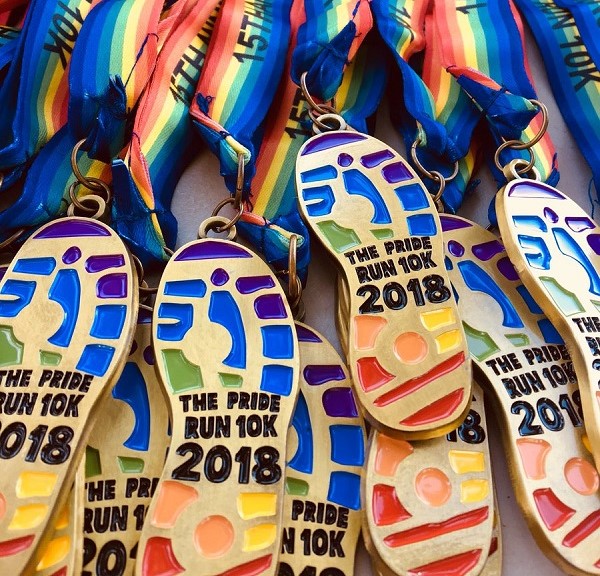 The runABC South weekend preview predicted that Pride Run 10K in Victoria Park, London on Saturday (11 August) would be 'the biggest and most colourful event' and the 15th edition did not disappoint. Perfect conditions helped 851 runners to complete the three-lap course in good times and to claim the brightest bling on offer (see photo).

After some unsettled recent weather the only rainbows visible in the world famous East London people's park were the symbols of the event that featured so prominently on the race medals. The main 10K was preceded by the immensely popular Kids Pride Run 2K fun run for children aged 4-14 years with all finishers receiving a goody bag and the Pride medal.

Pride Run 10K has been nurtured and refined by London Frontrunners led by race director Minesh Patel and now ranks as one of the best 10K races in UK, with a fully inclusive and fun atmosphere and family-friendly, after-race party. Each year an LGBT charity benefits from the runners' efforts – this year's recipients being Schools Out UK.

Josselin Polini (Victoria Park Harriers, 33:01) used his local knowledge to go 12 seconds clear for victory from Casper Jakobsen (Bournemouth, 33:13) and M40 Robert Laing (Kent AC, 33:53). The Kent club was out in force, providing half of the top 12 finishers.

Pride Run 10K is a quality race as well as a joyous and colourful occasion. This was evidenced by the 70 runners who were home inside 40 minutes. The host club London Frontrunners provided the mid-point finisher – Marco Bertelli (M40, 52:04) and Janni Jiang (W35, 1:31:12) was the proud athlete who was cheered home as final finisher.