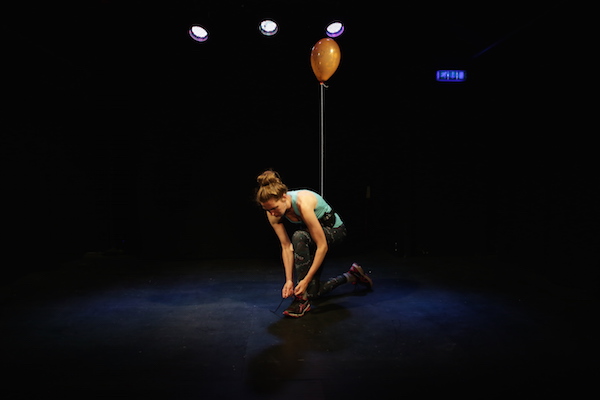 'It's Not a Sprint' Continues Unique 'Run' at Edinburgh Fringe

A unique solo performance about life, love and running is winning praise at the Edinburgh Fringe.

It’s Not a Sprint, written and performed by Grace Chapman and directed by Ellie Simpson, was inspired by the women in Grace’s life and her practice of tackling anxiety through running – something most, if not all, runners can relate to.

The story goes something like this: Maddy is a typical millennial – entitled, allergic to life admin and celebrating turning 30 by running a marathon. We meet her at the start line, raring to go, with a ‘Happy 30th Birthday’ helium balloon tied around her waist for morale.

But Maddy has more than 26.2 miles to worry about. She also has an important life decision to make on the way. Pete, her sweet (if slightly boring) long term boyfriend proposed the night before. By the end of the marathon she needs to decide: 'yes or no'.

But as the race goes on, Maddy’s dilemma devolves into a battle between her and herself – the ‘voice in her head’, her inner ‘worst best friend’ – who knows her weaknesses, logs her mistakes and champions her regrets.

Maddy is sent into a spiral of self-doubt, forcing her to confront her deeper anxieties on fidelity, children, career and body image. As a woman, she is worn down. As a marathon runner, unprepared. This race is the first true test of endurance Maddy has ever undertaken, but her escalating grapples with the voice in her head make it a more gargantuan challenge than even she could ever have imagined.

Running throughout the duration of the 55-minute show, with a balloon tied to her waist, Grace’s performance in It’s Not a Sprint brings to life the interminable exhaustion of long-distance running, the pressures facing many women as they leave their 20s and the constant struggle for self-improvement in the face of self-destructive tendencies which has come to define millennials as a generation.

As the Edinburgh Festival Fringe weren’t already gruelling enough for solo performers, it’s estimated Grace will run the equivalent of over four marathons during the course of the festival whilst performing (an average of nearly five miles-worth of steps per performance) in an unusual feat of Fringe endurance.

‘It’s Not a Sprint’ by Grace Chapman presented by NOVAE theatre in association with The Space runs from now until 26th August (not 14th or 21st) at the Pleasance Jack Dome (Venue 23). The performance starts at 1.30pm and is suitable for ages 14+. Tickets priced £6.50–£11.