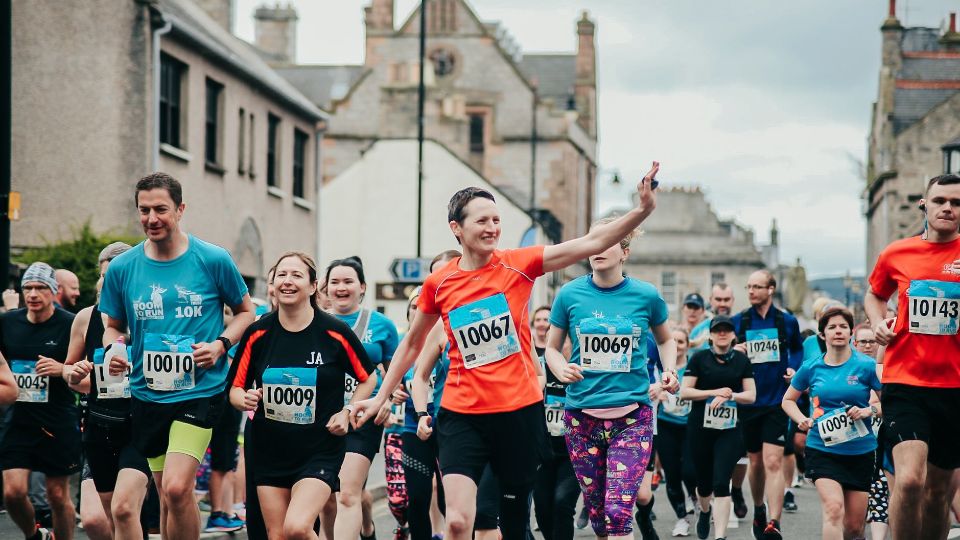 The North-East’s runners turned out in force on Saturday to take their places on one of the many start lines at Huntly’s Room to Run festival.

runABC Scotland caught up with Bruce Murray of the Huntly Sports Hub after the sold-out event. He told us, “It went very well. We were one of the first runs in this neck of the woods to get going this year, and it was excellent to be able to do that. Everyone seemed to be enjoying themselves, despite the hills and the pain!”

Although the current situation forced the organisers to make some changes – like moving the finishing line, reducing entries to 300 in each of the three adult races and putting registration in the great outdoors – COVID compliance elsewhere brought at least one unexpected benefit. With the Braemar Gathering scaled down this year, the world-famous Huntly Pipe Band found themselves at a ‘loose end’ – giving them the opportunity to march runners from the town’s Simpson arch to their start lines.

Feedback from all the runners who took part in the event – which included multi-terrain 5K, 10K and Half-Marathon distance events as well as children’s runs – was very positive, with many particularly delighted to have taken part in the first ‘big run back’.

Rory Brand of Garioch Roadrunners, who took home the gigantic 10K winner’s trophy, said, “I would definitely do this race again. It was nice to do a race with a little bit of everything: trail, road, hills up and down and then a decent flat couple of miles. Even if the route is a little bit longer than a 10K, a finish into a crowd is always welcome.”

With that finish line near Huntly’s town square, Room to Run is very much an event with community at its heart. Although the Huntly Hairst, the food and farming festival held at the same time, was scaled down this year, it still attracted around 50 stallholders, most of whom were entirely cleaned out by hungry runners and their supporters by the end of the day.

Reports also suggest that many runners carried their race day ‘buzz’ through on into the evening in the local pubs, and from there to the local campsite, which was fully booked for the night.

As in previous years, proceeds from Room to Run will go towards improving Huntly’s sports facilities, and, more specifically, the renovation of an all-weather pitch to include a better surface and a few running lanes.

Reflecting on the day, Murray said, “With more trail than road, we never set out to be a ‘competitive’ race. And because of that, we have a real mix of runners taking part, from the really fit to those who’ve just come off a C25K programme."

"As organisers, we love to see the smiles of everyone as they come across the line. We come away with a high, even though we haven’t run it ourselves!”

Room to Run results are available from runABC Scotland.