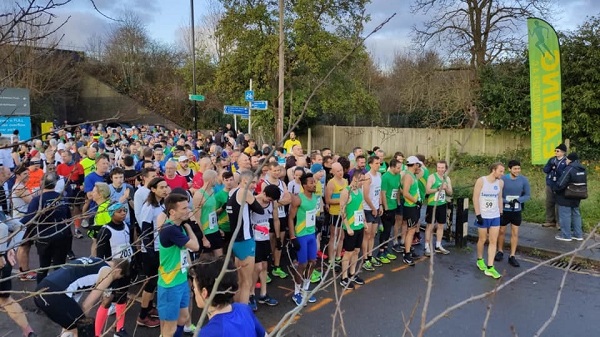 Daniel Cheeseman keen to crack on at Perivale 5

It was six degrees Celsius with a chill northerly breeze giving a 'feels like' factor of 2C but the pace was still pretty hot at the Perivale 5 on the first day of the metrological winter on Sunday (1 December).

Perivale is the smallest of seven towns within the leafy London Borough of Ealing and the traditional 5 mile road race has been a fixture here since 1998. Comprehensive records kept by the organising Ealing, Southall and Middlesex AC (ES&M) indicate around 250 men have ducked under 30 minutes and 100 women have beaten 35 minutes on the fast, flat circuit.

Keen to separate himself from the pack at an early stage was the eventual winner Daniel Cheeseman (City of York/St Mary's Uni) who joins the elite sub-25 list with a 24:54 PB. You can see him above (#59) apparently trying to steal a march on the opposition at the start!

ES&M thanked race director Phil York, all the volunteers, runners and supporters for creating such a superb atmosphere in Perivale Park and the surrounding roads. The comments were reciprocated online by first time competitor Mark Hill (Ealing Eagles, 56:22) who posted: “Thank you - first time runner and really enjoyed it. Very friendly event and lovely marshals. Will come again, definitely”.