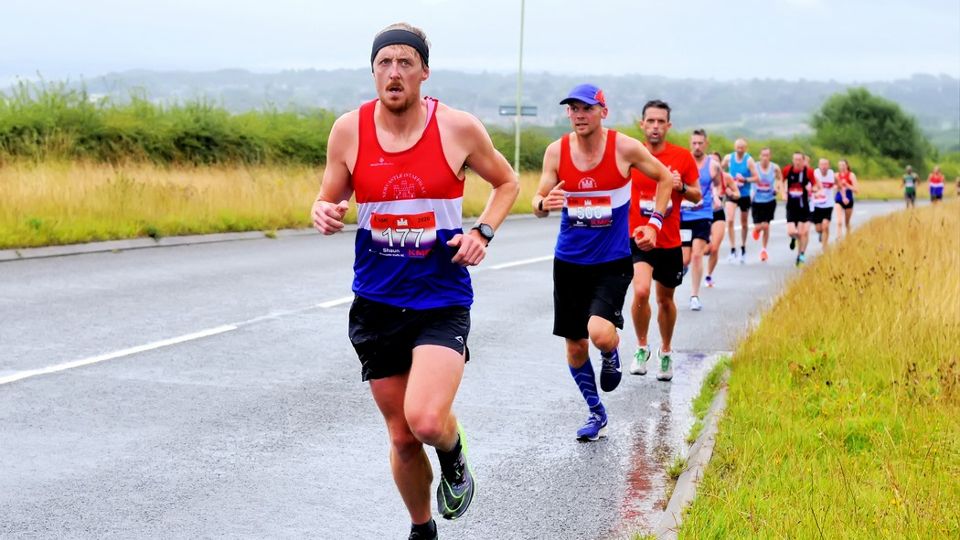 Back on top again at the Newcastle 10K

It was a winning performance all round.

It was 'game on' at the KMF Newcastle 10K as over 400 runners relished being back in action at this popular road race. There was torrential rain, floods and everyone’s favourite – Black Bank – on the menu at this well organised and marshalled event from Newcastle (Staffs) AC.

All systems were primed and ready to go at race number 12 in the NSRRA programme. One of the longest standing races in the area it always attracts a good turnout of runners from local clubs eager to test themselves on the single lap course that included a 2k (1.24 mile) climb.

The weather lived up to the Met Office forecast with leaden skies and rain before, during and after including a cloudburst at the finish! Marshals and spectators braved the wet conditions to clap and cheer everyone as they streamed away from the start at 10am outside Newcastle College then continued towards Knutton where they geared up for the ascent of Black Bank.

Up and over this hill and the hamlet of Scott Hay was followed by a long, fast descent into Silverdale, skirting flooded areas and traffic thanks to the marshals. Then, with the bit between their teeth, they picked up speed in the final, traffic-free section for a sprint across the finish line.

Samuel Crozier of Newcastle (Staffs) AC was the winner in 33:43 followed by Carl Moulton of Boalloy RC in 34:30. Close behind was Crozier’s teammate Ben Brereton who finished third in 34:33.

There was another win for Newcastle (Staffs) AC in the women’s race as Rebecca Twardochleb raced to victory in 37:03. Her teammate Sophie Goodfellow was second in 37:53 with Lucy Spencer of Newcastle (Staffs) Tri Club third in 39:09.

The full set of results is available via the RunABC Midlands Race Listings page.

PB Pacers did a sterling job of helping many runners achieve their target times and likewise the marshals who kept everyone moving to the end in a smooth and efficient manner despite the conditions.

Race Director Ken Rushton was delighted by the turnout saying:” I think what’s interesting is how the numbers in real races are starting to creep up. I think it shows organisers are putting on safe events and confidence is growing among runners to come back to live events.”

Amen to that Ken.