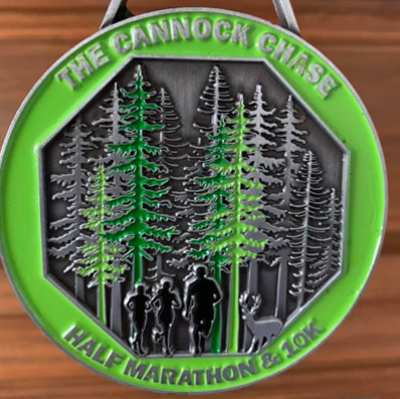 Runners conquer the hills at new Cannock Chase Half & 10K

Nearly 700 runners tackled muddy trails at the inaugural Cannock Chase Half Marathon and 10K on Sunday (27 October). There were more than a few hills to contend with...

Biblical weather resulted in flooding in many parts of the Midands making it diffiuclt to travel. However, organisers Nice Work staged a successful event in this beautiful forest, known for its trails and wildlife that was an ideal location for these two off-road races.

Such is the popularity of Cannock Chase that the event sold out with new runners as well as those more experienced keen to explore the forest resplendent in its autumn colours. Waiting for them was muddy singletrack, puddles and hills although the downhill stretches made up for these as they completed one lap (10K) or two laps (Half Marathon).

Thomas Adams of Harpenden Arrows won the Half Marathon in 1:23:59; Elizabeth Watters of Birchfield Harriers was the winning female in 1:37:12.

Lee Gratton of Rugeley Runners was the winner in the 10K, crossing the line in 36:42. Laura Wordley won the women’s race in 47:24.

There was plenty of encouragement from the cheerful marshals and race crew who provided support to runners particularly when they started to feel the effects of the hills. One runner, Karen Clayton was particularly grateful for this. She was taking part in the penultimate event of her 50 in 50 Challenge for Marie Curie and was going well until mile 11 when hip issues and cramp threatened to derail her efforts. Karen showed her gutsy side and pushed on to the end where congratulations and hugs awaited her.

There were prizes for the leading men and women, age category and teams and every finisher received a beautiful forestry themed medal.