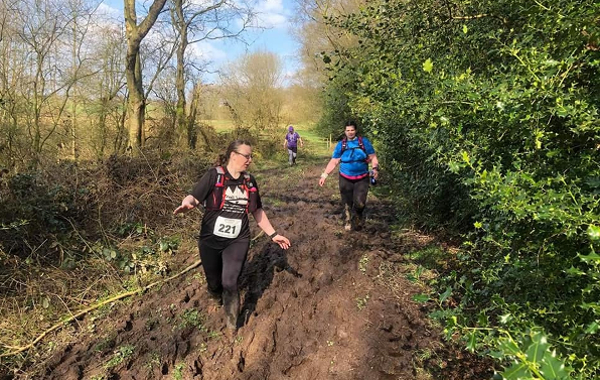 Whilst riders tackled 30 fences at the Grand National, 180 runners faced challenging conditions at Saturday’s (14 April) Joules Newcastle Way Trail Marathon. The going was soft to very difficult at times at this grand run from Gold Events.

It was grey skies to begin with as everyone headed off from the Ash Inn at Mow Cop and followed a testing course through fields, woodland, country parks, farms and sections of road.

Then the sun broke through and temperatures started to rise as they continued along a scenic route that finished at the Lord Hill pub in Market Drayton. As well as the mud they had over 100 stiles to climb over and these combined with the warm weather started to take their toll. However, they were assisted in their endeavours by three well stocked checkpoints, each with their own unique character: there was beer at Madeley (CP2) and 90’s rave music at Loggerheads (CP3).

Amongst the entrants were a trio of ladies running on of behalf of Annabelle’s Challenge, the foremost charity for vascular Ehlers-Danos syndrome. Another group of five runners – two men and three women were fundraising for Cancer Research UK.

There were prizes for the top three men and women, first team and two special ‘chocolate’ trophies for the ‘muddiest runner’ and ‘best selfie’ respectively. Every finisher received a medal and a T-shirt followed by a well deserved drink in the Lord Hill.