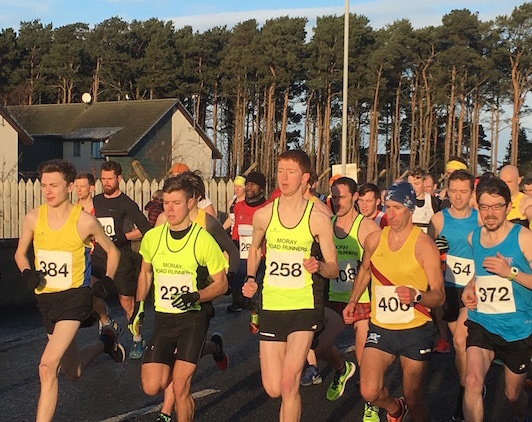 Storm Deirdre blew over to reveal a fine day for the Moray Road Runners’ Turkey Trot yesterday (Sunday 16 December), an event which also doubled up as the North District’s 10 Mile Championships.

All 400 of the available places for the event sold out in advance, disappointing many runners who had hoped for an on-the-day place for one of the North East’s favourite events.

Over a post-race cupcake, Wilson told runABC Scotland Online that he was very pleased with his run: ‘There was a bit of a stiff wind to start with, but that was much better than it could have been given the weather yesterday! I had to work hard around miles 4 and 5, but then I just picked up the pace and tried to see what my legs could do.’

The Scotland international was also quick to praise his Moray RR colleagues. He added: "It’s really good to have a win with a good time on home soil, but this was also a great day for our coaches, Carol and George Sim. I worked with them as a junior and they help me now as a senior. We all train together, Ewan, my brother and I, and we all finished well today."

When asked about how he felt about his younger brother finishing second, with a PB, he laughed and said: "As long as he finishes behind me, that’s just fine!"

Marie Baxter (JSK Running Club), second lady home, had nothing but praise for the organisers: ‘I really enjoy coming to this event. Moray Road Runners look after us so well! There’s always great food, and an ace medal.’

She added: ‘Being the last big North District event of the year, every one hangs around afterwards, too, which makes it a really social, friendly race. I can’t get past without knowing someone! It’s also really good to get a 10 miler in, as there aren’t many of those around.’

runABC Scotland Online’s Christine took part in the Turkey Trot too.: "I’ve missed the event for the last few years for various reasons, and I’ve been gutted, as it’s got such a great vibe. The course was hillier than I remembered it, but that may be something to do with being five years older than when I last ran it!

"Moray Road Runners do a great job organising all their events, and taking part today – and catching up with my clubmates and other North District runners – is just the perfect way to finish the racing year."