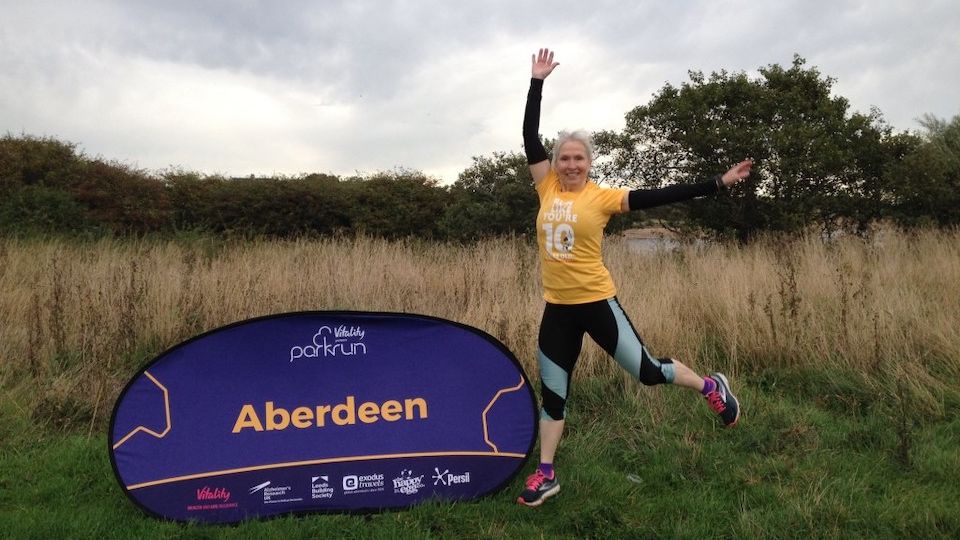 Aberdeen’s first parkrun turned 10 last weekend, and boasted a record turnout for the year to boot.

Three hundred and forty-nine runners – including 39 first timers – gathered on the Granite City’s Beach Boulevard course to mark their times for event no. 462.

That’s a far cry from the 99 who turned out for the first ever event on 8 October 2011 – including future Commonwealth Games Marathon Bronze Medallist Robbie Simpson, who set the first ever course record at 15.31 and Fiona Brian (nee Rudkin), now part of the scottishathletics Marathon Project, who stormed across the line as first female (and seventh overall) in 19.05.

According to Louise Cassidy, wife of Aberdeen’s first Event Director James Cassidy, parkrun's founder Paul Sinton-Hewitt was personally involved in the event’s launch and training of its original volunteers.

Cassidy told Cynthia Fry, ‘Reporter on the Run’ for Aberdeen parkrun, ‘parkrun was so small at the time that Paul Sinton-Hewitt himself and his lovely wife, Jo, came up for a weekend to help us set up and did our initial training about using the laptop, timers and scanners. We had a wee session with them in a meeting room above Satrosphere Science Centre with about 10 of the original volunteers. I dashed out from it and ran around the parkrun route in a pair of jeans, marking out the kms with silver spray paint, so that P S-H could come and approve our course.’

Over the first decade of its life, Aberdeen parkrun has cheered 13,227 individual finishers from 707 different clubs over 100,195 finish line moments with an average finishing time of 27.22. The flat and fast course has also been joined in the North East by parkruns at Hazlehead, Ellon, Crathes Castle, Stonehaven and Ury Riverside Park (Inverurie). Nearly 1000 volunteers help keep the show on the road.

First across the line at Aberdeen’s tenth anniversary parkrun was Euan Wond (Falkirk Victoria Harriers) in a time of 17.02. Hot on his heels were Martin Mueller (17.34) and Alan Jeffery (Portobello RC, 18.04).

In the women’s event, Aberdeen AAC’s Hannah Mutch crossed the line first in a personal best time of 19.19, followed by Emma Jenkins with her own PB time of 20.14. Third place went to Gillian Cardno-Strachan of Fraserburgh RC (20.36).

The 100,000th finisher was Aberdeen parkrun regular Hamish Macdonald, 154th across the line on the day. A veteran of 239 parkruns, Saturday’s outing was his 169th on the Beach Boulevard.