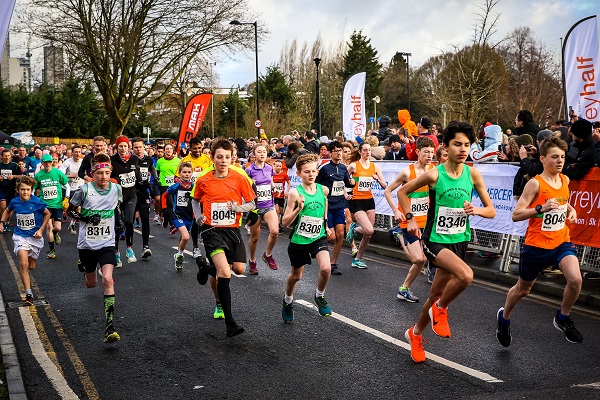 More than 4,000 enjoy Boz's oranges at Surrey Half Marathon

Racing commenced with 376 finishers in the supporting 5K (pictured) won by Guildford and Godalming AC junior Raphael Rivero (17:38) and Woking AC's Katie Hopkins (18:54). All the participants were able to experience the closed road atmosphere of the main race and the free Mercer Surrey Half Marathon headwraps were a useful defence against the strong winds and later hailstones.

Paul Pollock was made to work hard for his victory in the Mercer Surrey Half Marathon, held on a single loop course on traffic-free, well-surfaced roads from central Woking into the surrounding countryside. Pollock finished 30 seconds clear of Abdulaziz Mahamedsalih Ebrahim (1:06:54) from Norwegian club Strindheim Friidrett. Andy Coley-Maud (Clapham Chasers, 1:07:12) was a close third.

The picturesque Surrey event is made more enjoyable by performances from local bands and the many cheering spectators on the route. Lexus Guildford provided the lead car as a team of Woking CC cyclists and Xempo pacers led thousands of runners onto the course.

There was an unofficial Guinness World Record for completing a half marathon while pushing a wheelchair by Richard Moffatt and Evie Read (1:32:54), raising funds in aid of Action for A-T (Ataxia-telangiectasia). The current official record is 1:35:06, so good luck to Richard and Evie.

Hundreds of children also took part in a 2km race sponsored by Greenfield School and the community atmosphere was exemplified by local fruit man Boz who provided thousands of oranges for the competitors.