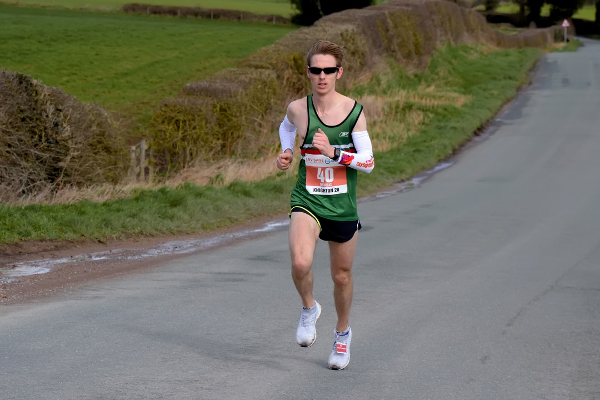 A controlled display of running by Nicholas Barry saw him win the Knighton 20 yesterday (Sunday 10 March) in blustery conditions. He was amongst 300 runners who had a hard morning’s work at this classic 20 miler.

Winter returned with a vengeance at the Envisage-VeloRunner Knighton 20, the third race in the North Staffs Road Runners Association (NSSRA) programme. It also incorporated the Staffordshire Championships.

Snow showers early on cleared to leave blue skies and sunshine at this small hamlet close to the Staffordshire/Shropshire border that was the location for this popular 20 miler and a Relay option. This race was used by many entrants as a long training run in preparation for London or Manchester Marathon.

The race started and finished at Knighton Sports & Social Club and involved running three hilly laps on lanes around the area which were exposed to the elements. Runners had to deal with fierce 40mph crosswinds that together with the wind chill, left temperatures feeling close to 5 degrees or less. The windy weather meant the course record was unlikely to be broken.

Nicholas Barry of Sale Harriers was strong and focused throughout and was first across the line in 1:53:39. Oliver Harradence of Royal Sutton Coldfield AC was second in 1:55:50 with Chris Fitzpatrick of Helsby RC third in 2:02:31.

The gusts didn’t stop Tracie Trueman of Lawley RC from becoming the fastest female in 2:22:29. Anna Hollingworth of Stone MM was second in 2:23:27 followed by her teammate Joanne Bentley in 2:23:46.

The next race in the NSRRA programme is the KMF Newcastle 10K on Sunday 14 April.