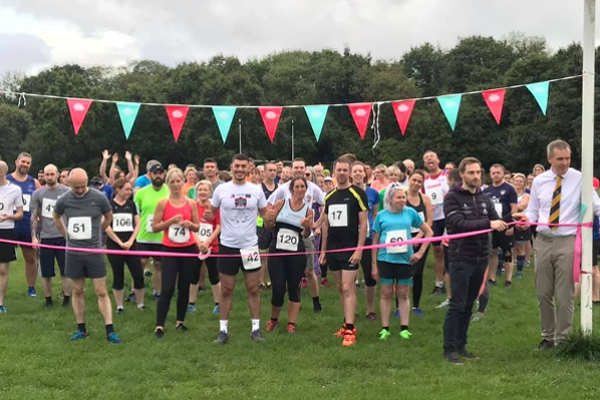 Everyone was a winner at Telford’s Timeless 5K (Wednesday 14 August) as they ran in memory of Lee Jackson. It was also the night where the winner of the Telford Timeless Inspirational Person award was announced.

This was the second outing for Telford’s Timeless 5K – an unusual race where all the runners had a chance of winning irrespective of age or ability. The format was straightforward: view a map of the course, predict your finish time then run without a watch, aiming to match it or get as close as possible. The winner was the runner who got closest to their predicted finish time.

It was a night to remember Lee Jackson, a well-liked and gregarious man with a passion for travel who lost his fight with brain cancer in April at the age of 41. Sisters Joanne Jackson and Marie Mason have been fundraising for The Brain Tumour Society and along with Telford Hornets under 14’s were the chosen recipients at this charity event. All entry fees were donated to these two worthy causes.

The event started at 6.30pm from Telford Hornets Rugby Club as participants jogged or ran an undulating (hilly!) 5k route. Graham Berry achieved a perfect match with his finish time to win the Lee Jackson Timeless 5K Memorial Trophy and £100: Alex Wilson came within two seconds of her finish time to become the winning female with Nisha Bhatia Reassures the winning relay team.

Marie Mason was the overall winner of the Telford Timeless Inspirational Person award.

The generosity of spirit shown by the running community made for a poignant and successful event that was enjoyed by all.