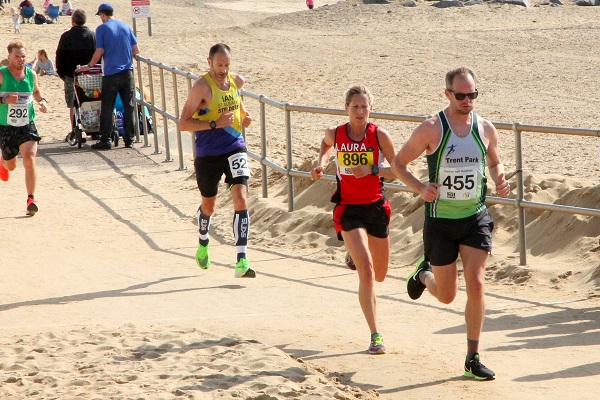 No sweat for Rachel at Clacton-on-Sea

Records fell in bracing conditions at the Clacton-on-Sea Carnival Half Marathon and 10K races yesterday (Sunday 18 August). Despite a nagging breeze throughout the morning, there were course record times for Rachel Sweatt and Gavin Lewis over 13.1 miles and Laura Thomas in the 10K.

In fact, the only race winner not to establish new figures was the 10K champion Paul Mingay (Colchester Harriers, 36:58) although as an M60 master he can be well satisfied with his outright win by 28 seconds over Gary Taylor (Felixstowe RR, 37:27). Paul is the top UK ranked over-60 at half marathon (1:17:32) and full marathon (2:47:40) and is just two seconds behind Alastair Walker (Teviotdale, 35:14) in the national 10K list.

Third place went to Paul Wain (38:16) with just the slightest suggestion that he was acting as a useful pacemaker for Ipswich Jaffa team-mate Laura Thomas (38:28) who sliced 2:20 off the women's course record in a superb fourth overall. Laura Shewbridge (Hadleigh Hares, 40:04) - pictured above - was also inside the old record and W55 Val Jennings (Ipswich Jaffa, 44:20) was another master in top form on the Clacton seafront.

The 10K runners complete one lap of the half marathon course and more than 300 of them had crossed the finish line opposite Fourth Avenue on Clacton Promenade before the half marathon record was trimmed by five seconds by Gavin Lewis (Woodford Green, 1:17:10).

It was clearly no sweat for Rachel Sweatt (Grange Farm & Dunmow Runners, 1:23:28) as she smashed the course record by three minutes to win the women's race in eighth overall. The ladies' podium was completed by W40 Vicki Taylor (Finch Coasters, 1:32:14) and W50 Paula Downing (Mablethorpe, 1:33:15).

This sold out event promoted by Nice Work Race Management attracted 900 runners. There were 339 finishers in 1:52:01 in the 10K; 411 completed the half marathon in 3:21:22 and there was also a good entry for the supporting Clacton Carnival Fun Run, with bespoke medals for all finishers.