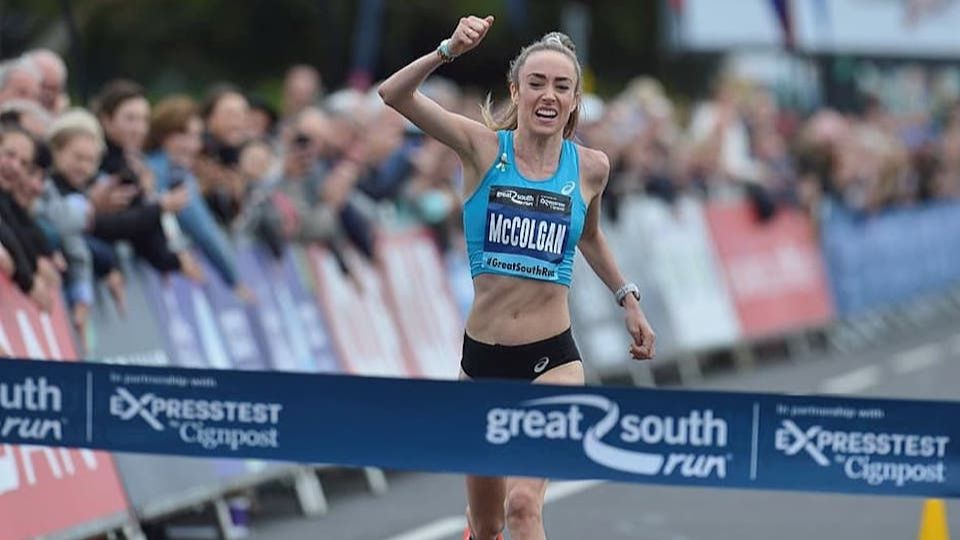 Will Scotland’s star of track and road eclipse Radcliffe?

Scotland’s Eilish McColgan ended an already incredible season with a win that brought her ever closer to taking on Paula Radcliffe’s mantle as the UK’s greatest ever female runner.

With her third victory at Sunday’s Great South Run, the Dundee Hawkhill Harrier took almost 30 seconds off Paula Radcliffe’s 10-mile UK record, which had stood since 2008 (as reported earlier this week on runABC Scotland).

In crossing the Portsmouth finish line in 50.43, the triple Olympian also took 17 seconds off Sonia O'Sullivan’s course record set in 2002, nabbed the European record from Israel’s Lonah Chemtai Salpeter, set a new PB by nearly a minute and beat her mother Liz McColgan’s record of two wins at the same event.

McColgan tweeted after the race that she ‘could not have asked for a better way to end 2021’.

But it’s the longer-term comparisons with the English running legend – and McColgan’s incredible potential – that are now the focus, as Sunday wasn’t the first time the 30-year-old Scot bested a Radcliffe record this year. In August, she broke Radcliffe’s 5000m UK record with a 14.28.55 run in Oslo.

And, like Radcliffe, McColgan will soon be heading for the marathon – after pacing Charlotte Purdue to a 1.11 half and a 2.23 PB at this year’s London race.

Tweeting ‘what an experience’ about her time in London, McColgan added that she was ‘motivated and ready for what next year has in store’ – which we now know will include a trip to the Commonwealth Games in Birmingham, alongside fellow Scots Laura Muir, Jemma Reekie, Josh Kerr, Andy Butchart and Jake Wightman.

But for now, it’s rest. In the words of her mother Liz, it’s time for a ‘well deserved break’ for her daughter. ‘It’s always good to have a break from running with no injuries and healthy. Looking forward to the next couple of years with marathon running on the horizon’, the elder McColgan tweeted.

With Radcliffe’s UK and former world marathon record of 2.15.25 for Eilish to beat, we’ll be looking forward to the next couple of years, too.