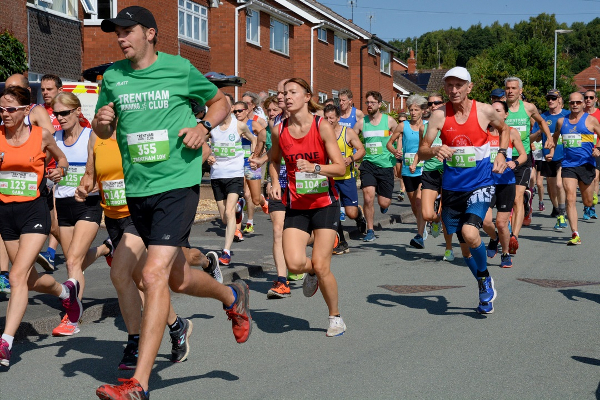 Despite being on the brink of collapsing, a runner in his 70s was able to finish yesterday's Trentham 10K. John Smith (M70) of Newcastle AC was facing difficulties as he approached the finish but clubmates Craig Taylor and Martyn Davies helped him in those last few yards before he collapsed.

John was taken by ambulance to A & E but later discharged and is now recovering at home while he finds a space for his British Masters bronze medal and Midland Masters silver medal.

Now in its 44th year, the Trentham 10K is one of the oldest races in Staffordshire and a popular fixture in the North Staffs Road Runners Association (NSRRA) programme. This year it had the honour of being chosen to host the British Masters Athletic Federation (BMAF) 10K Championship and attracted a top-quality field from local and national clubs.

Over 300 steely-eyed runners set off at 10.30am from Tittensor Village Hall in Stoke on Trent and followed a one-lap hilly course on roads around the area. Competition was fierce and so were temperatures at the Championship race, with individual and team gold, silver and bronze medals up for grabs.