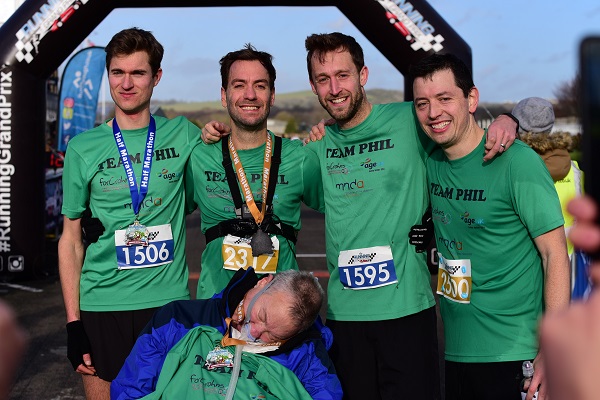 Team Phil are already Guinness World Record holders for 'the fastest half marathon pushing a wheelchair (male)' with 1:29:38 at Worthing on 10 February 2019 and on Sunday they added the marathon record (2:57:40) to improve on the mark (3:01:24) held by Sebastien Roulier, while pushing Marie-Michelle Fortin in the Montreal Marathon on 23 September 2018.

Team Phil are Marcus Green and Phil Rossall, a former teacher and keen runner from Orpington who has Motor Neurone Disease. Team Phil has raised over £28,000 for Motor Neurone Disease Association since Phil was diagnosed in 2016. But this truly was a team effort as friends David Mills and Guy James also ran a half marathon each while pushing a spare wheelchair and carrying a back-up breathing ventilator for Phil in a back pack! Their touching moment of glory was captured in this short video.

Running GP at Goodwood Motor Circuit is one of race management company RunThrough's most popular events and there were almost 1,200 finishers in six races from 5K to 50K, all based on laps of around 5K on the historic motor racing circuit.