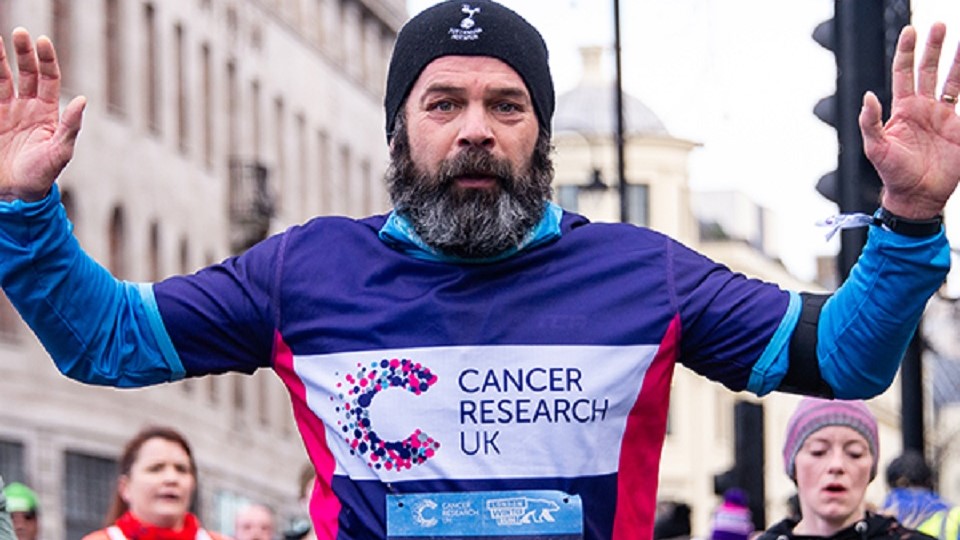 Cancer Research UK's annual fundraiser will now be virtual only

London's coolest and biggest 10K will still be taking place on Sunday 7 February 2021 – just not at the usual central London location. After a year without precedent, organisers have had to accept that an assembly of up to 25,000 runners in the capital will no longer be feasible. However, CRUK London Winter Run 10K will still take place in a new virtual format, culminating in a mass 10K run anywhere of your choosing, on the original race date.

Our pictured runner, Stuart Dent, is shown finishing the 2019 race in 51:16 – good enough for 3,507th position out of 18,516 finishers last year. The massive field was headed by Chris Rainsford (Highgate Harriers, 31:23) and Charlene Jacobs-Conradie (Luton, 35:48). There were 264 runners inside 40 minutes and Sarah Hobbs (Hogwarts Running Club, 2:20:34) proudly completed the official results.

Ironically, this year's London Winter Run was cancelled as it was considered 'too wintry' to run safely due to the impact of Storm Ciara. Despite this setback, more than 85,000 people have joined the fight against all cancers at CRUK London Winter Run and raised £3.5 million to help freeze cancer in its tracks.

Entries, which are free of charge, opened on Sunday (22 November) and remain available until Sunday 7 February 2021 – the original race date. CRUK has been the official charity of London Winter Run since its first year, in 2015. This has funded research that has helped double cancer survival rates in the last 40 years.

Things are looking a bit different for 2020/21 and charities need our support now more than ever. CRUK funds around 50% of all cancer research in the UK but COVID-19 threatens to severely impact research, making CRUK's ambition of improving cancer survival to three in four by 2034 more difficult.

Signing up for London Winter Run '21 will entitle you to collect ice-cool badges for completion of various distances in training including gold, silver and bronze awards for 100K, 50K and 20K respectively. But the best rewards are for fundraising targets, ranging from £25 for a snood and £50 for that all-important medal through to £500 for a stylish and toasty Winter Run hoody.

Really, there are snow other virtual runs like CRUK London Winter Run, so enter now and aim for that community effort on 7 February 2021. Sign up at the London Winter Run website here and view race details and previous results at runABC South race listing here