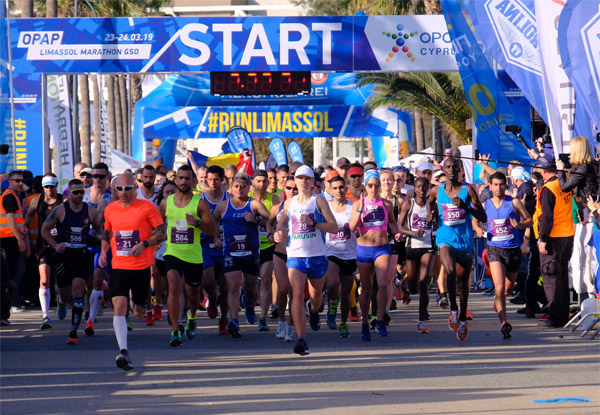 A big contingent of British runners enjoyed top race action and the delights of the springtime Mediterranean at the 2019 OPAP Limassol Marathon. 500 runners from around the UK joined locals and visitors from other countries for this popular running festival in the beautiful Cypriot resort.

Sunday's (24 March) feature race saw the international field set off from the seafront at Molos. For the first time this year, there was live streaming of the day’s action on YouTube and AlfaSport.TV featuring commentary from endurance runner Susie Chan and Erodotos Miltiadous, with live results and interviews.

With the Mediterranean glistening in the early morning sunshine, the marathon runners headed off on the flat and fast course past the marina and port, before turning around to follow the coast as far as the ancient ruins of Amathus. With a maximum altitude of 18m and breathtaking views out to sea, the course proved to be a perfect location to run a strong race, with lots of PBs and scenes of celebration as competitors crossed the finish line back at Molos.

The 2019 OPAP Limassol Marathon GSO was dominated by Abel Kibet Rop from Kenya who claimed the title with a 20 minute gap in a time of 2:17:40. Fellow Kenyan runner Ruth Chemisto Matebo secured the women’s title in 2:43:30.

Limassol Half Marathon, sold out for the first time in 2019, set off shortly after the marathon at 7.40am. Hilary Kiptum Maiyo Kimaiyo from Kenya secured the top spot on the podium after crossing the finish line in 1:07:19, and the female title went to Christine Moraa Oigo, also from Kenya, with a finish time of 1:15:37.

On Saturday (23 March) 228 teams competed against each other for the title of the fastest team in the PrimeTel Corporate 5K . The title was claimed by Garmin Cyprus with an average time of 16:44, followed by Orbit Moving & Storage (18:13). Christoforos Protopapas (Garmin Cyprus) was the fastest male with a finish time of 15:44, and British runner Jordan Foster (UKRunChat) was the fastest female in overall 10th place on 17:51.

The PrimeTel Corporate 5K Race was followed by Andrey and Julia Dashin’s Foundation Youth Race, a popular event that gave young runners (6-16) the chance to get involved in the big weekend of sport. Later Sunday runners soaked up the pre-race vibe at the Petrolina Energy Day and the Mitsides Pasta Party.