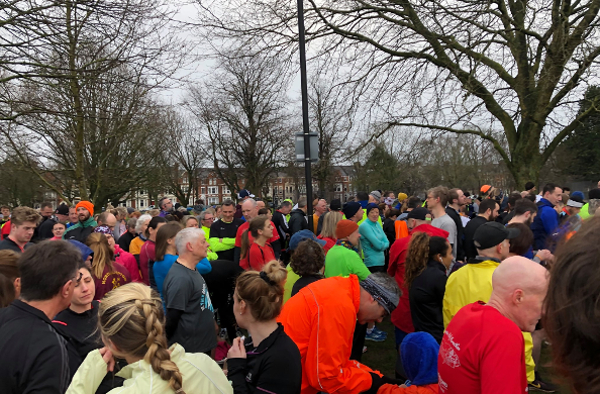 Leap in attendance at Northampton parkrun

A record number of people ran in a reverse direction at Northampton parkrun (Saturday 29 February) in what was the fifth biggest UK attendance on the day. Not even the freak storm dampened enthusiasm as runners (and walkers) made history at this first leap day parkrun.

The event core team had decided to celebrate this historic occasion by running the route in reverse and 727 people turned out at Northampton Racecourse to put the idea to the test. A member of the 32-strong team had written details of the reverse route to avoid confusion which was helpful at the first timers' briefing.

Taking part was a team from Northampton Old Scouts U15 rugby team and numbers were boosted by tourists whose own parkruns had been cancelled due to the conditions. It was a pity the weather didn’t perform a u-turn as a band of rain, hail and strong winds swept through the Racecourse, soaking the runners and volunteers.

The reverse course threw up a few surprises and received a ‘thumbs up’ from the runners.

Noah Bennett of Rugby & Northampton AC was the first man home in 16:35 recording a PB. Kelly Barnett was the first female in 20:26.

England rugby union star Courtney Lawes paid a visit to meet the team and donate a signed England rugby shirt to Rowan’s Reality Fundraiser Auction. This was set up by Northampton parkrun with the aim of raising funds to purchase a new wheelchair for 10-year old Rowan, a very popular event regular, who suffers from undiagnosed genetic disorders. He has outgrown his current chair which prevents him from taking part in activities such as parkrun but a new wheelchair would enable him to live life to the full.