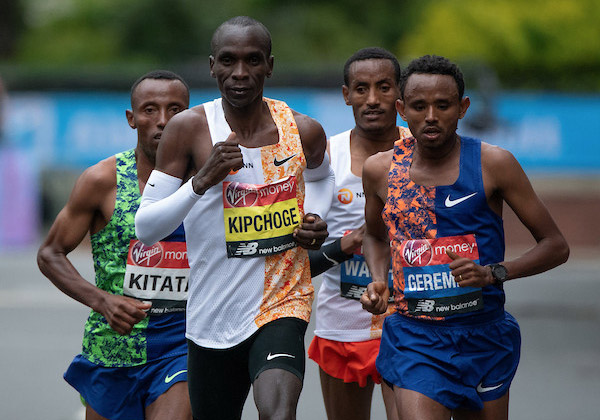 The Kenyan’s victory in London in a course record of 2:02:37 has athletics supporters and anyone with an interest in sporting history scrabbling around for new superlatives.

I was one of the millions who settled down on Sunday morning, hoping that somehow our own Mo Farah could topple this titan of distance running on the streets of the city where he grew up – the same city where he gloriously became a British Olympic legend just less than seven years prior.

I was naïve, unrealistic and overly-sentimental. It was never on. And that is no slight on Mo Farah. His status as a true great of the sport is secure, but in marathon terms, Kipchoge is operating on a different level from the rest.

The Olympic champion, four times winner in London, three times winner in Berlin, winner in 11 of 12 marathons he has competed and world record holder in a staggering 2:01:39 – his achievements are unprecedented and beyond compare within marathon running.

Instead we must look to the wider sporting world for valid comparisons. Muhammed Ali, Pele, Tiger Woods, Serena Williams and the like….those who redefined the possibilities of their sports and removed the imagined limits. Kipchoge now shares that status.

In the way that Woods and Williams played golf and tennis that no-one thought possible, so Kipchoge is now doing with marathon running. Not only is he resetting the boundaries, but as with the rest of the sporting gods, he makes it look simple.

As his opposition strain every sinew to stay within his slipstream, he has an effortlessness about him, striding just as purposefully in the 26th mile as he does from the start line.

Mo and the rest of the world’s best marathon runners may still have their moments, but they are occupying an era defined by one man. And they, like us, can do little but admire Eliud Kipchoge.